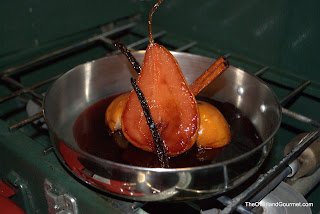 There is something about the smell of vanilla and cinnamon on a cold and wet winter day that brightens my spirit.   The aroma of this dish will bring folks from far and wide, so you had better make extra!

Pre Trip Preparation
To same time on the trip, measure out the sugar and wine at home, placing them in separate plastic containers.   Nalgene containers work great for holding your pre-measured wine.   The cinnamon stick and vanilla bean can be placed together in a third plastic container.

Preparation on the Trail
Slice the vanilla bean in half lengthwise with a paring knife.  Scrape seeds from the bean and place both bean halves and seeds in a medium sauce pan.  Combine the wine, lemon juice, sugar, cinnamon stick with the vanilla and bring to a boil until sugar dissolves.  Reduce heat and add the pears, cut side down. I prefer using Bosc pears for this dish, although Bartlett pears and even Asian pears would also work. 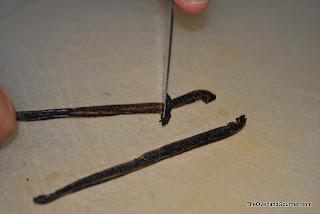 Cover and simmer for 15-20 minutes until pears are tender, but not mushy, when pierced with a knife. Be careful not to over cook the sauce, as it will quickly become too thick and may burn.  When the pears have reached their desired doneness, remove pan from heat and plate, discarding the cinnamon stick and vanilla bean. 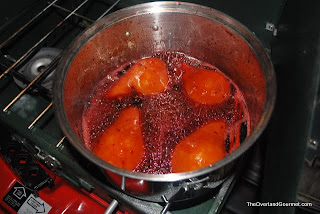