Freezing Beer for Your Cooler 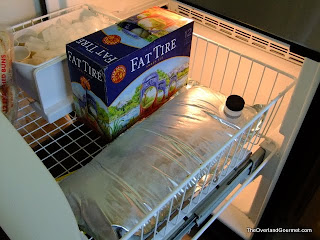 If you are anything like me, you read the title of this post, tears welled up in your eyes, and you screamed expletives up to the heavens.  I assure you no (good) beer was severely injured in the making of this post.

Background
A couple of long-time river rafting friends of mine and I were discussing coolers and keeping food cool when they mentioned 18-day trips they had taken down the Colorado. "We would just freeze our beer," they said, "and we could make the entire trip without ice." " I am sorry," I said to them, "you lost me at 'We would freeze our beer.'". The two of them proceeded to explain how they would utilize two sets of coolers for their river trips. One set would be filled with cans of beer, which would then be placed in large commercial freezers.

The other set of coolers would be used to store their perishable foods. Frozen beer would be used to keep these coolers cold and as the beer began to thaw they would replace these cans with fresh ones from the 'beer coolers'. Now, I remember my roommate in college forgetting about some beer he had placed in the freezer to chill and when we discovered it the next day, several of the cans had exploded. They explained to me how they had made the same discovery and said we would be fine as long as I did not freeze 'Light' beer. The Experiment
As we contemplated how we would test this technique, we knew we wanted to keep this relevant to the beer we, and our friends, typically drink.  We chose to experiment with New Belgium's Fat Tire, Cerveza Tecate, Pabst Blue Ribbon, and Coors Light to show 'what not to do'.

Before we got started we contacted New Belgium Brewing to inquire into the possible ill-effects of freezing beer and we got this response back:


"...unfortunately it will only keep your food cold, it will not keep the beer flavor. When you freeze beer- it basically turns the solution back into a mixture of frozen highly alcoholic beer and ice. So when you thaw, you will have high octane beer and water mixture- no bueno. But, if you were REAL thirsty, I bet you would not mind that much."

We pressed on in the name of 'Science' to determine how well this technique really worked.  We established a test plan for the experiment:
Individual cans, of each of the four beer brands, were frozen one at a time in a plastic container to ensure we wouldn't end up with beer on the inside of our freezer. 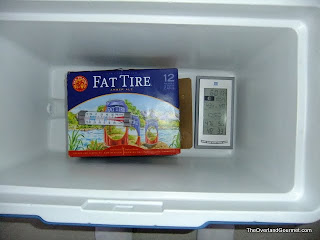 We then lowered the freezer temperature to the lowest setting and placed a 12-pack of New Belgium Brewing Fat Tire inside, with one of our Starbucks bladders, for 72 hours to ensure the cans would be frozen.

We wanted to test some extreme conditions when we ran this experiment so during the time the beer and water were freezing, both our Coleman Xtreme 5-day coolers were placed in the garage with an average daytime ambient temperature of roughly 90 degrees.  We then removed the beer and ice from the freezer and placed each in their own cooler located on our back patio.  Again, we were looking at an extreme case and would never leave our cooler in direct sunlight if we were trying to keep our food cold.

We placed our wireless thermometer transmitter in the ice cooler and the receiver in the beer cooler.  this allowed us to check both coolers at the same time.  We then monitored the two coolers over the next 36 hours, checking the temperatures approximately ever 12 hours by opening the lid of the beer cooler and snapping a photograph of the thermometer. 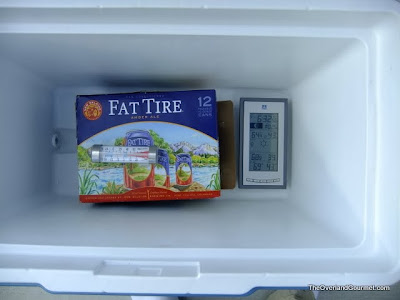 New Belgium Brewing was right about 'high-octane' alcohol after the beer has thawed. We opened a can right after it was thawed, and noticed an immediate hit of alcohol on the tongue. It was overpowering and not the slightest bit appealing. We let the 12-pack sit in the refrigerator for a couple of days before opening the second can. By this time, the alcohol had mellowed out a bit, and the flavor was more like the original. We continued to drink the 12-pack over the next week, and the longer the longer the beer sat in the refrigerator, the closer to the original flavor it got.

We feel that given the effects freezing beer has on flavor, we would not readily recommend this technique for shorter camping trips. However, we think this technique does show some merit when it comes to extended travel, as this allows the alcohol in the beer to become reincorporated into the solution.  If space for a second set of coolers is not a problem, we think this might be an alternative to running blocks of ice. It would be important to allow the beer enough time to reincorporate before drinking.

If you found this review helpful, please consider using one of the affiliate links below. The price is the same for you, but a small percentage of the purchase price goes to me, which helps keep this site going. Thank you!