With more than 135,000 miles on the 4Runner, the factory clutch was starting to show its age and it was time for a replacement.  After some research, I decided to go with the Marlin Crawler clutch kit and an OEM flywheel.  I purchased the clutch kit directly from Marlin Crawler and the flywheel from a local automotive parts store. 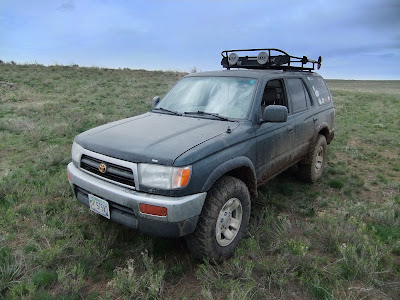 Installing the Clutch Kit:
When the clutch kit arrived in the mail, I quickly set out to gather the required tools needed to make the replacement.  I used the following tools:
Word to the wise, rent a friend and some pneumatic tools! It took me about 12 hours start to finish to get everything done. 10 years and 135K miles tends to seize bolts so much of the time was spent waiting for PB Blaster to work.

The replacement was straight forward, following the directions laid out in my service manual.
Front Skid Plate off: 10 years of oil changes meant everything up front was covered in a nice thick layer of motor oil, dirt, and apparently grass.


The Marlin HD clutch kit has been in the 4Runner for a little over 50,000 miles now and we have no regrets. I would recommend this upgrade to anyone with a third-generation 4Runner or second-generation .  This clutch is worth every penny and has been a huge improvement to the overall capability of the 4Runner.  The clutch seems to be endless amounts of grip thanks to the pressure plate’s stiffer springs.  The pressure plate does cause the clutch pedal to be a bit stiffer than the original, partly due to the original’s age, and does require more force to disengage.  The clutch has performed flawlessly in the field, either climbing up a sandstone wash near Bluff, UT or pulling out full size trucks along the Ashton-Flagg Ranch Road.  I no longer worry about slip and glazing, it just works no questions asked!