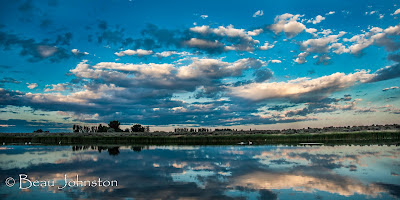 For several months now I had been promising my friend’s son at trip to see some wildlife and finally I had a free weekend I could fulfill my promise. 5am came early as I jumped into the 4Runner with my camera bag full of equipment and headed to pick up my friend’s son. Our destination was a small pond, located near Springfield, ID, adjacent to the American Falls Reservoir. Our timing was important, not only to catch the sunrise, but I wanted to catch the birds, who had spent the night on the pond, before they took off. After a hour and twenty minute drive, we arrived at the destination. We slowly crept up to a small dock and blind and setup the tripod.

We were rewarded for our effort and able to photograph a number of birds on the still water. The bird that provided the best shots was an egret fishing on the far side of the pond. We watched as the egret worked the distant shore in search of breakfast. A tilt of the head signaled she had spotted a fish and after judging the distance she would plunge her head deep into the water. Not every attempt proved successful but I am sure she was well fed before she departed for her morning flight.