We had just fled the stress of previous employment, constant budget cuts and layoffs, to arrive in, what we hoped to be, a slower pace that would allow us to spend more time together in the outdoors. For the months prior to the move I had been commuting 3 hours per day in an effort to remain employed, but at what cost. We loved Eastern Idaho, our family and closest friends were there, why would we want to leave? Finally we made the decision to go out on a limb and venture out of our comfort zone. We were leaving for Wyoming.


The move had been stressful on both of us, it was a new place and we didn't know anybody. In times like these, one second guesses their decision. 'Should we have stayed and tried to find work back in Idaho?' 'Should we have held out hope for that elusive job in a warmer climate?' It was time to get away for a day; we both needed it. We needed to take our mind off of the move, work, and focus on spending quality time with each other doing what we love. A coworker mentioned a large number of wild horses could be found in Wyoming's Great Divide Basin, so we left early and headed for the basin to explore and see if we could find the wild horses.

We entered the Great Divide Basin, by following the road south from Jeffery City, and quickly spotted a group of wild horses feeding in the distance. We surveyed the landscape for an acceptable route and made our way toward the group. While we had traveled through areas of Idaho that were home to wild horses, we had never seen them, so it was a treat to be able to observe them on our first outing in Wyoming. 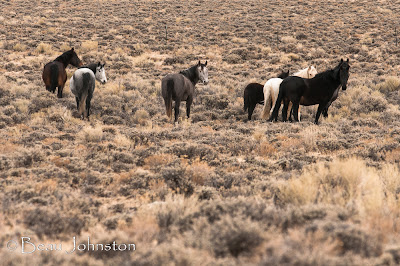 The horses towered over the sagebrush, whose height had been stunted by the persistent Wyoming wind, and seemed intrigued by our presence. They allowed us to approach slowly, in our 4Runner, until the black male signaled we were close enough with a quick stamp of his hoof. He was protecting his herd, and a shy young colt who stayed to the back of the group.


After watching and photographing the first herd for a little over an hour, we decided to venture further south into the basin to see what we could find.  We eventually made our way down to the Bare Ring Butte area and discovered a second herd out in the distance.  As we we drove along the two-track road, the stallion appeared, seemingly from out of nowhere, charging  toward us at full speed.  We were not prepared for such an awesome sight and sat in amazement as he raced toward us with mane and tail outstretched in the wind. 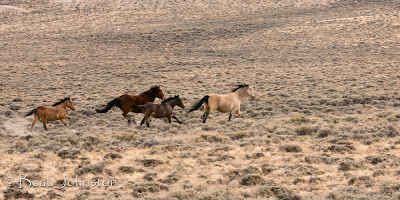 Our 4Runner must have resembled a horse approaching the herd, as we drove along the dusty road, because once he realized what we were, he stopped and placed himself between us and the herd.  He eventually became impatient with the situation and quickly ushered the herd off into the distance.  We too turned and headed off.  It was then I realized all of my doubts about the move had melted away.  I realized that this is what we love to do, and living in Central Wyoming was just going to be another one of our many adventures.  Wyoming was going to be home for the foreseeable future, and we had a lot of exploring to do. 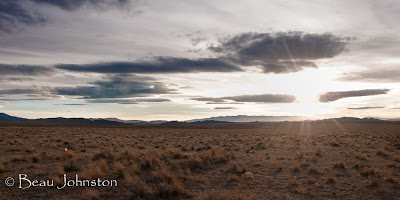