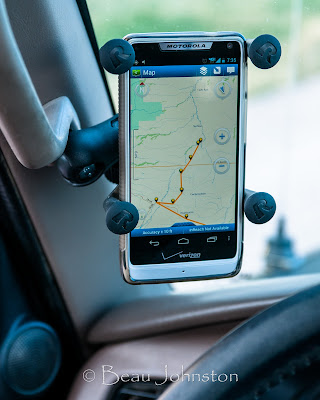 I have struggled for years to find a decent cellular phone mount for our 4Runner.  Inexpensive suction cup mounts would vibrate loose over corrugated roads or fall off in the heat.  Also, suction cup mounts also obstruct the view out of the windshield.  I wanted something that could be quasi permanently mounted in the truck, withstand the rigors of off-pavement travel, and could be used on both our smartphone or Garmin Nuvi.


What I found was RAM Mount's new X-Grip cellular phone mount, which uses four spring-loaded arms to grip onto the sides of the smartphone.  I was sold on the video showing the design's tremendous rigidity in extreme vibration.  I chose to maximize rigidity when in use by not utilizing the kit's suction cup base, but instead mounting the X-Grip to the 4Runner's A-pillar using Ram Mount's Motorcycle Handlebar Clamp Base.

What I did:
To mount the X-Grip, I removed the lower A-pillar mounting screw cover and lower M6 button-head cap screw.  I then placed the M6x40 flat-head socket cap screw into the motorcycle handlebar clamp base and screwed it into place.  I chose to use a flat-head socket cap screw to help center the M6 threads in the base's 8mm bore.  The base of the grab-handle is thin enough on our 3rd generation 4Runner that I was not required to shim the clamp base.  The M8 socket-head cap screws that came with the clamp base were not used.

Because of the A-pillar's angle, and the angle I wanted the phone's screen to be, I was forced do some modification to the clamp.  I notched the clamp's top half to allow the phone's screen to be slightly angled upward.  I reduced the clamp's grip by reducing it's contact area with the X-Grip ball but have not noticed any ill effects.  I am sure that this might vary depending on how much material was removed.  If the mount seems loose, a file could be taken to the flat side of each clamp half to reduce the material thickness, increasing the gap between halves. 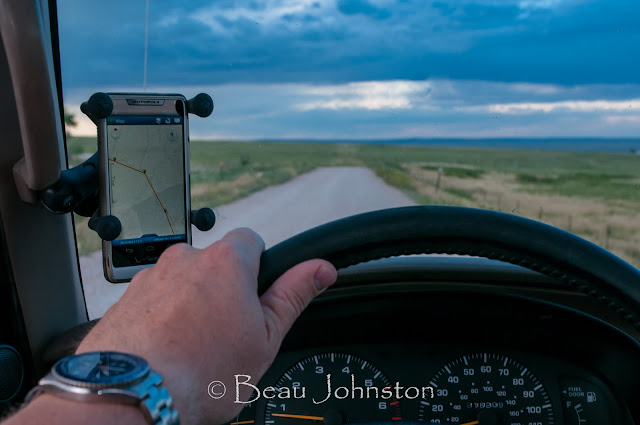 Conclusion:
I have been very happy with the X-Grip and how I mounted it to the A-pillar.  The mount has been in place for roughly four months without coming loose.  It has seen numerous off-pavement trips without incident.  I like being able to keep my phone out of the way and still be able to quickly access my DeLorme inReach communication app.  I also like the mount's ability to switch between multiple phones and our Nuvi.  I can also rotate the phone to be able to utilize the phone's video recording capability.

While the video isn't from driving off-road, it gives you an idea of the mount's rigidity.