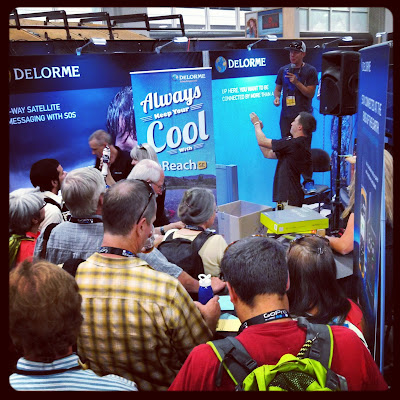 Each year the outdoor industry's top textile companies, equipment manufacturers, stores, and media all converge on Salt Lake City for four days of gear nirvana.  Booths are laid out as far as the eye can see, and each year gets larger and larger.  This year a third off-site pavilion was setup to house the growing number of manufacturers wanting to attend the show.  Unlike the last two years we have attended, we never heard much buzz about next year's 'it' item.  While there were some remarkable products at the show, nothing stood out as game-changing. 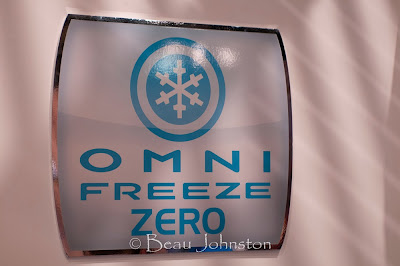 We started our whirl-wind tour of the OR show by talking textiles with the folks at Columbia Sportswear.  2012 saw the release of their OMNI Freeze Zero fabric.  The fabric's "blue rings react with your sweat to lower the overall temperature of the material, accelerate the wicking process, and provide instant and prolonged cooling."  This year Columbia Sportswear has introduced the technology into a whole host of shirts, including the Men’s Terminal Zero™ Long Sleeve seen below.  This really looks like a great way to beat the summer heat while traveling. 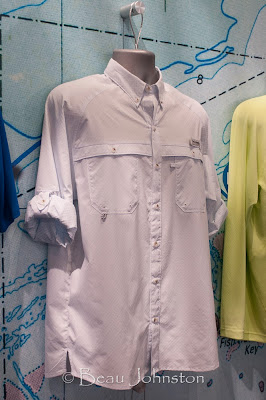 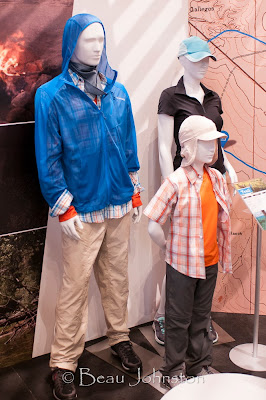 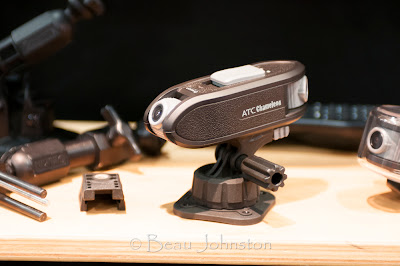 This year Oregon Scientific launched their new entry into the consumer 'Point of View' HD video camera market, the ATC Chameleon.  The camera features two 720p HD video cameras with both lenses offering 170º field of view.  Each lens can be independently positioned to film from different angles.  The camera automatically syncs both video feeds together into a single .MP4 file for easy playback.  The ATC Chameleon retails for $199.99, and is available for purchase now.  Click here for our initial test footage from the camera. 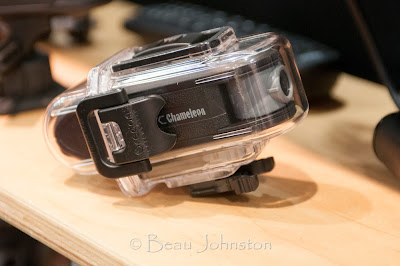 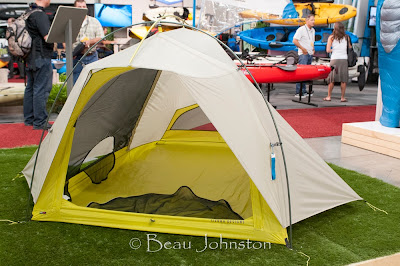 It is really cool to see an industry leader like Sierra Designs step back and redesign the tent.  Their new Flash 2 two-person tent integrates the rain fly and tent together into a single structure.  This, coupled with the tent poles located outside of the rain fly, allows the tent to be setup in the rain while virtually eliminating the possibility of water getting inside. 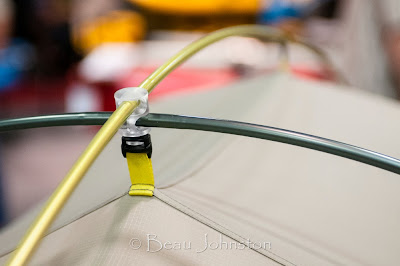 Vestibules are located along the tent's sides, with access openings provided in the mesh wall. 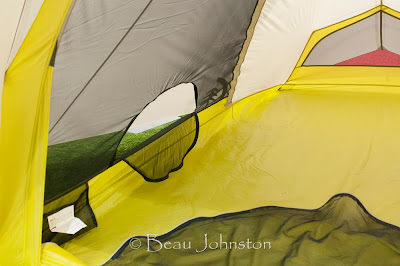 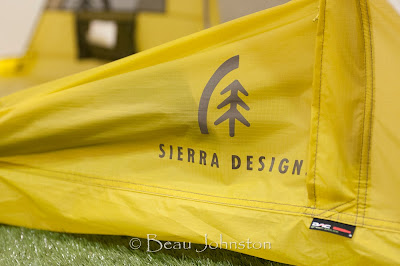 Sierra Designs will be introducing three new sleeping bags for 2014.  The Backcountry Bed (left) is a mummy-style bag that does not utilize any zippers.  Instead, an integrated quilted 'blanket' provides the insulation over the oval-shaped opening.  The Backcountry Quilt (right) is designed to be used in warmer conditions, when you want to travel light.  The zipperless design wraps around you with the integrated foot and hand pockets.  The Mobile Mummy (center), shown below, looks like a traditional mummy bag but its unique design incorporates arm holes and a center zipper.  The bag is designed to allow the wearer's legs to easily slip out of the bottom, have the bottom fold back, and be pinned in place while being warm around camp, when it is just too cold to get out of your warm sleeping bag. 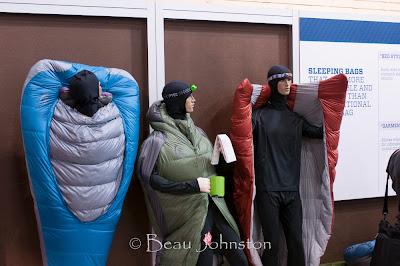 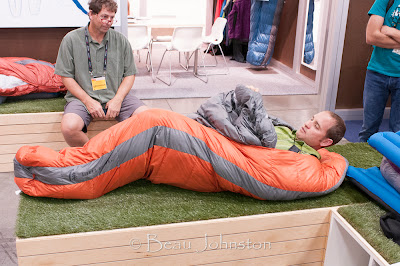 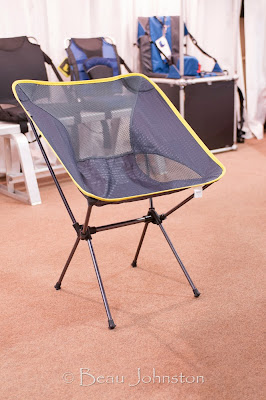 Travel Chair has drawn on their 30+ years of camp chair manufacturing experience by introduced the Joey Chair.  The chair is designed for the minimalist traveler looking for a compact and lightweight camp chair that doesn't break the bank.  The Joey features the seat height of any competing chair on the market but is still compact enough to weigh in at 1.95 lbs and rated 300lb load capacity.  The Joey Chair retails for $69.99. 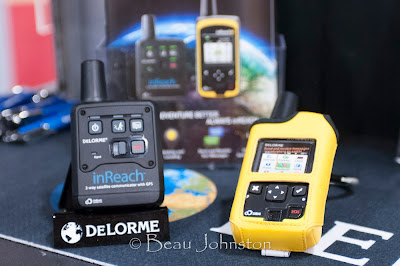 DeLorme introduced their second inReach platform at this years show, the inReachSE.  The SE version incorporates a LCD display and added functionality by allowing the user to type messages directly through the device, with out the need of a smartphone or tablet computer.  The redesigned inReach also boasts a more ergonomic design and a thinner profile than the original, which we think is a step in the right direction!  The original inReach retailed for $199, where the SE version retails for $299.  Both have the same subscription service options. 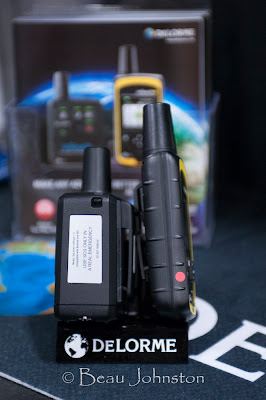 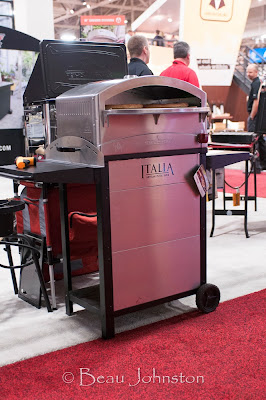 Not much was new from the folks at Camp Chef this year OR show, although their new Italia Artisan Pizza Ovens caught my eye.  The ovens feature an open front and ceramic pizza stones promote even heat distribution on your two/three-burner Camp Chef stove or as a stand-alone unit as shown above.  While geared more for the RV camper or tailgater, I think I could handle one for our cooking classes at home.  The oven retails for $170.84 and can be purchased directly from Camp Chef, or a host of sporting goods stores across the country. 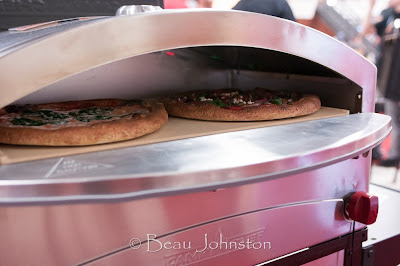 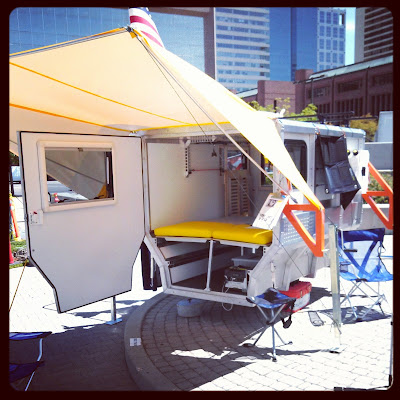 The folks at Taxa, the company that manufactures the Cricket Trailer, are working on a prototype truck camper called the FireFly.  The FireFly, which will be available to fit most of the popular pickup models, weighs in at a mere 600lbs and has enough room to comfortably sleep two adults and store enough gear for an epic trip across the Southwest.  The FireFly should be available late 2014. 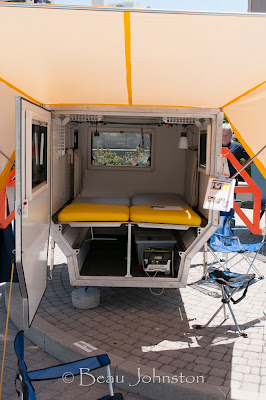 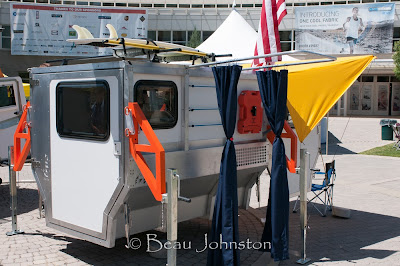 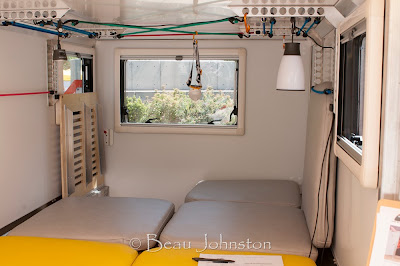 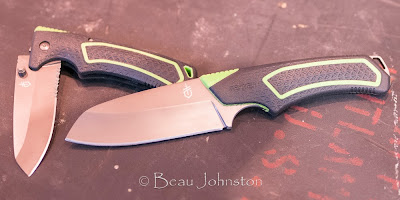 Gerber announced their new Freescape collection of knives aimed at making 'living in the Outdoors more fun.'  We are really excited about the fixed-blade version which incorporates a 'santoku-inspired' blade shape that is perfect for food preparation.  We were able to hold both knives and were impressed with their balance in the hand.  The fixed-blades full-tang construction and textured rubber handle felt secure in the hand and very comfortable.  The real test will come when they are released in early 2014. 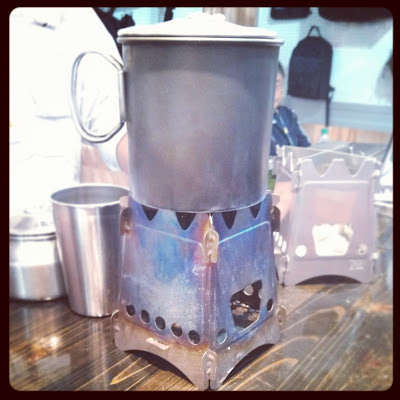 There are a multitude of minimalist stoves on the market designed to burn wood while in the back country or in emergency situations.  We have seen many over the years, but have never really been impressed with their designs.  That is until we found the EmberLit stove by MerkWorks of Utah.  Not only does the stove collapse into next to nothing, it is strong/stable enough to support the weight of a grown man.  You can find the EmberLit stove at www.EmberLit.com. 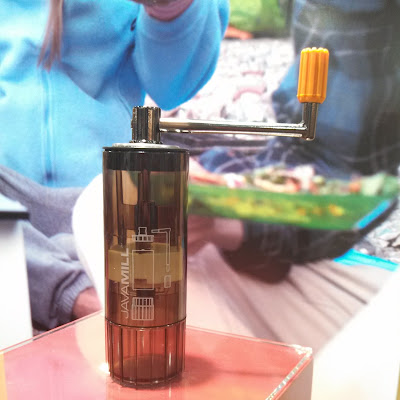 We love the products the design team at GSI Outdoors dream up, and their new JavaMill is no exception.  The mill is designed to quickly grind a single serving of coffee and disassembles to fit inside GSI's Commuter Java Press.  While the display model was a prototype, we liked the ergonomics of the successor to their Java Grind.  The JavaMill will be available in Spring 2014 at a retail price of $29.95. 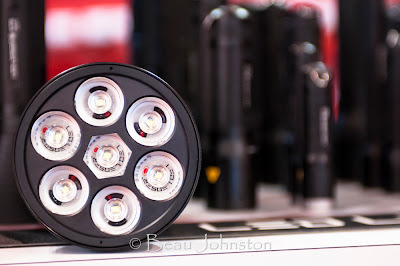 I had just finished talking with a well-known flashlight company about why they didn't use multiple LEDs in the design.  I was told it wasn't possible to focus multiple LEDs in a single flashlight. Well they must not have spoken with LED Lenser, because it looks like they figured it out.  The German company, owned by Leatherman, had their rechargeable X21R flashlight on display and their CEO was more than happy to demonstrate the flashlight's focusing capability.  The 1600 lumen, yes you read that right, retails for $599.99 though, so I don't think I will be running out and buying these as birthday presents any time soon.

I always like stopping by the Tokina/Hoya booth while at the show to 'talk shop' with their staff.  While there this year, I was able to attach two of their pro f/2.8 lenses on the camera and play around.  The AT-X 116 DX lens has been getting some really good reviews from folks photographing star trails, and I can see why.  I only wish they had a product review program! ;-)