Our Thoughts:
I have long lusted after LED light bars and often wished I could replace our old halogen off road lights with one.  I could never justify the nearly $700 price tag for a name brand 20" light bar, let alone $1300 for a 40" bar.  I was happy running my two IPF 968s with 100 watt bulbs.  As with everything, the popularity of an item brings competition and competition brings better pricing.  A few Chinese companies have entered into the market by producing less expensive (some times cheaper quality) products which are sold from various off road specialty shops, like the one we got from Jasper Offroad. - Jasper has since gone out of business. 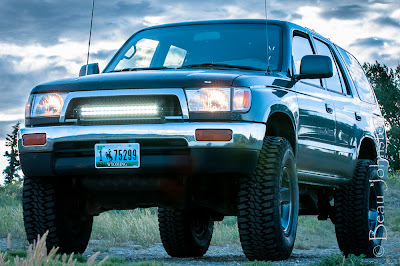 Okay, so lets cut to the chase.  I know everyone wants to see the light output, so here you go.  I think the LEDs speak for themselves.


When compared against the '99-'02 headlights on our 4Runner, the difference is night and day.  Our old IPFs barely made a difference over the stock high-beams but the 20" double-row light bar puts out so much light you can't even tell your high-beams are on.  We noticed the difference more after driving with the light bar on for 20-30 minutes and then turning it off to rely on the headlights.  It actually took my eyes a couple of seconds to adjust to the 'lack' of light.  I noticed myself slowing the 4Runner down because I was having a hard time seeing.

Light output isn't the full story though.  The light bar we tested from Jasper Offroad did have some issues that we had to overcome.  Firstly was the build quality.  In order to get our 20" bar installed, I had to 'chase' the 5/16-18UNC threads with a tap to remove excess material that was preventing the stainless socket head cap screws from being installed.  While this only took a minute to accomplish, it might be a major inconvenience for someone who does not have the tools to do this. 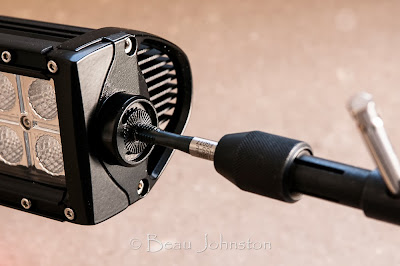 The second problem we faced with our light bar was discoloration.  We received the light bar in April 2013 and within a mater of weeks, the light bar began to fade in; turning into a bronze color. I immediately contacted Jasper Offroad about the problem and was promptly sent a replacement light bar.  Ryan, with Jasper Offroad, provided the following information in a recent email:

I eventually decided to mount the original light bar back on the 4Runner to see how long it would take to completely fade.  After six months, the light bar faded to a light bronze as shown below.  Ryan also tells me they will have these light bars back in stock within a month or two of posting this review (11/12/13). 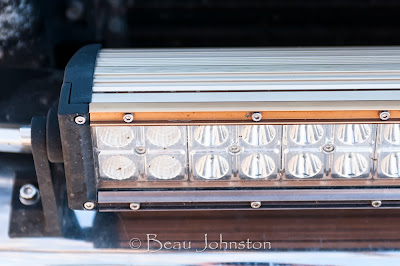 Conclusion:
It is clear the 8800 lumen produced by the Jasper Offroad's 20" Double-Row LED Light Bar is a insane amount of light, but is the price difference between these Chinese-made bars and name-brand bars worth it?  The light bar has functioned very well for the six months we have been running it on our 4Runner.  While the bar is proof that 'You get what you pay for,' one could potentially buy two Chinese-made light bars for the price of one name-brand equivalent.  I know that savings could buy a lot of fuel for our travels but are we really saving any money if the bar does not hold up?  I plan on running the light bar through a torture test and will follow this post with a part two.  We will see how well the light bar's 'toughened glass' holds up when the lights are on and it is below freezing...

Disclosure of Material Connection: Jasper Offroad loaned  the LED light bar to us for the review.  They went out of business before we could return the light bar.