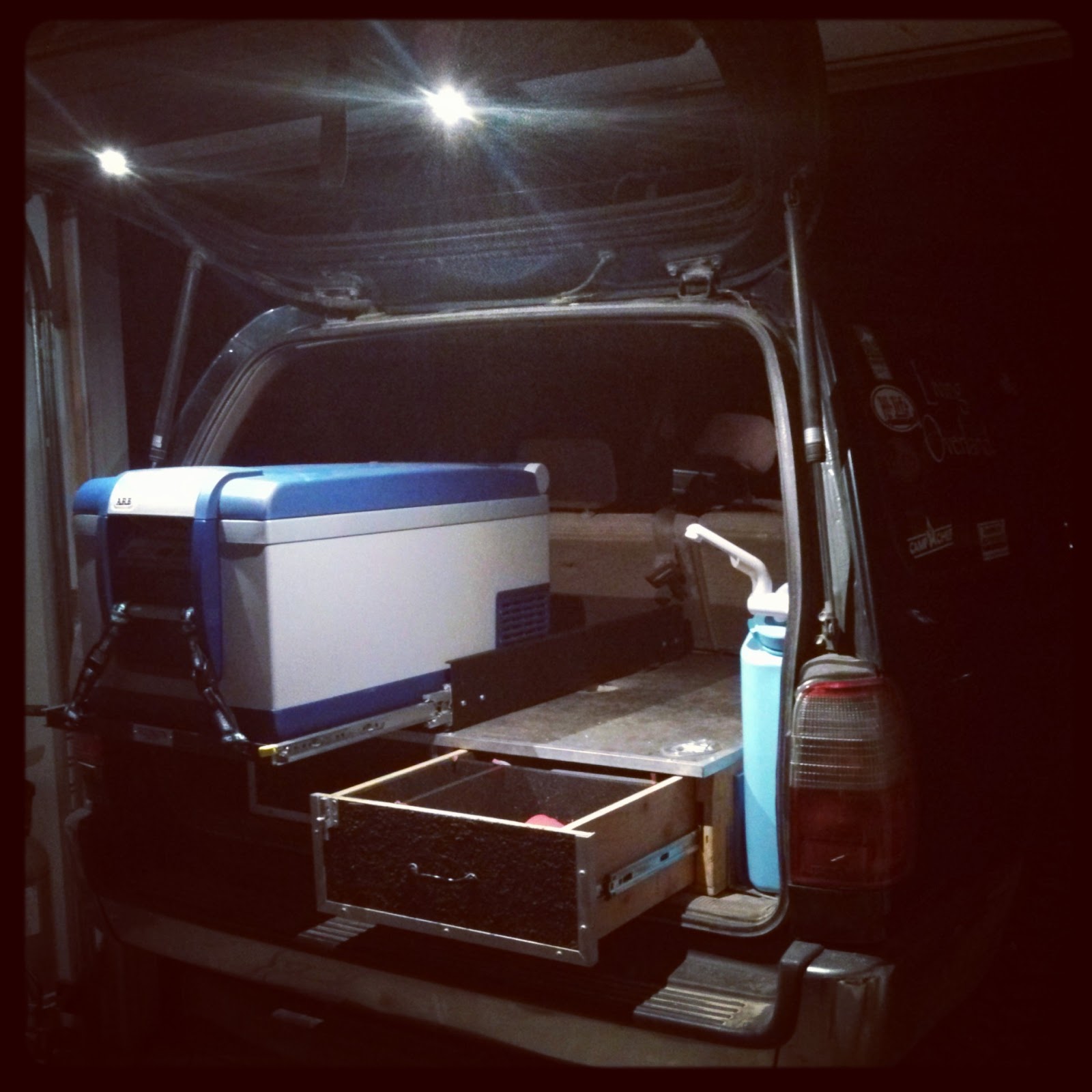 It is not uncommon for us to pull into camp, well after the sun has gone down, hungry and ready to start cooking dinner.  We have, for many years, relied on headlamps, flashlights, and lanterns to illuminate the back of our 4Runner while cooking - the factory hatch light just doesn't cut it when trying to cook a meal.  I have been looking for a more permanent solution, one that would not require us to dig through our gear bags to find our headlamps.  The logical solution was to install a set of low-profile LED lights onto the hatch, but there wasn't much on the market.  Most people were installing strip-style lights, but they use low-output LEDs and require a good length of lights to produce a meaningful amount of light.  I wanted something different; I wanted a clean installation, with minimal lights, that still wouldn't blind me while trying to cook.

I found Rigid's A-Series lights and decided to give them a try.  The plan was to mount two of their low power (200 lumen) natural white lights onto the hatch, near the rear window, to shine down onto the cooking area and provide light for working/walking around the rear of the truck.

I chose to install the lights on to the rear hatch, which posed a bit of a problem.  There is limited space to feed the new wire alongside the existing hatch wiring harness.  I was able to route the 14ga wire by first removing the rear hatch light and plastic trip piece to gain access to the wiring harness. 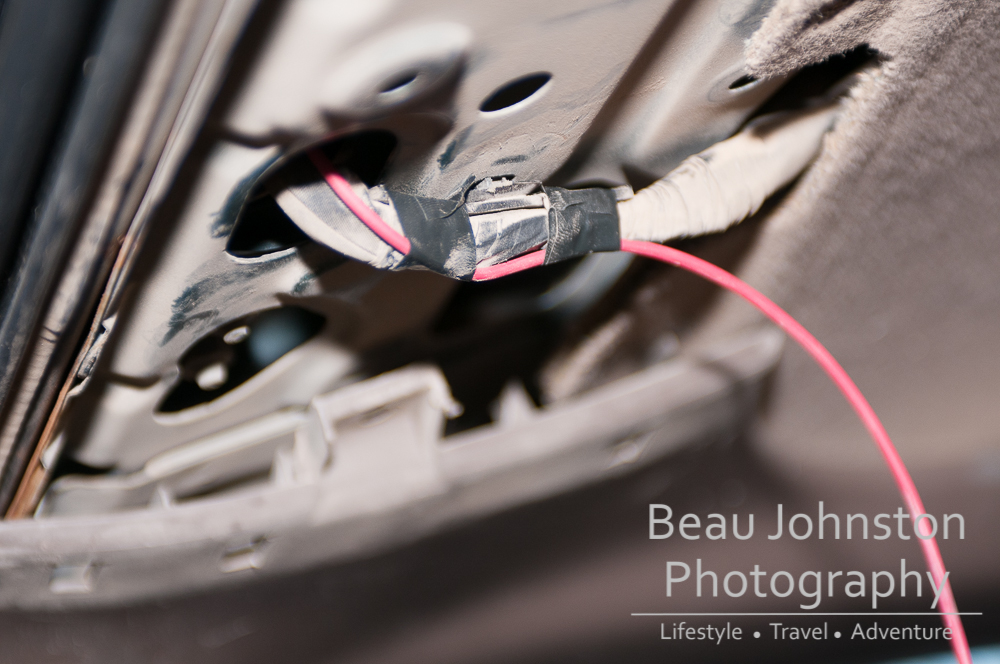 I carefully removed the clip connecting the rubber wiring harness boot to the hatch and fed the end of an electrical fish tape through the rubber cover.  This took some patience as there is barely enough room for the tape to slide through.  I had to 'massage' the tape past a couple of the bends, but I was able to slide it through and connect the 14ga wire with electrical tape. 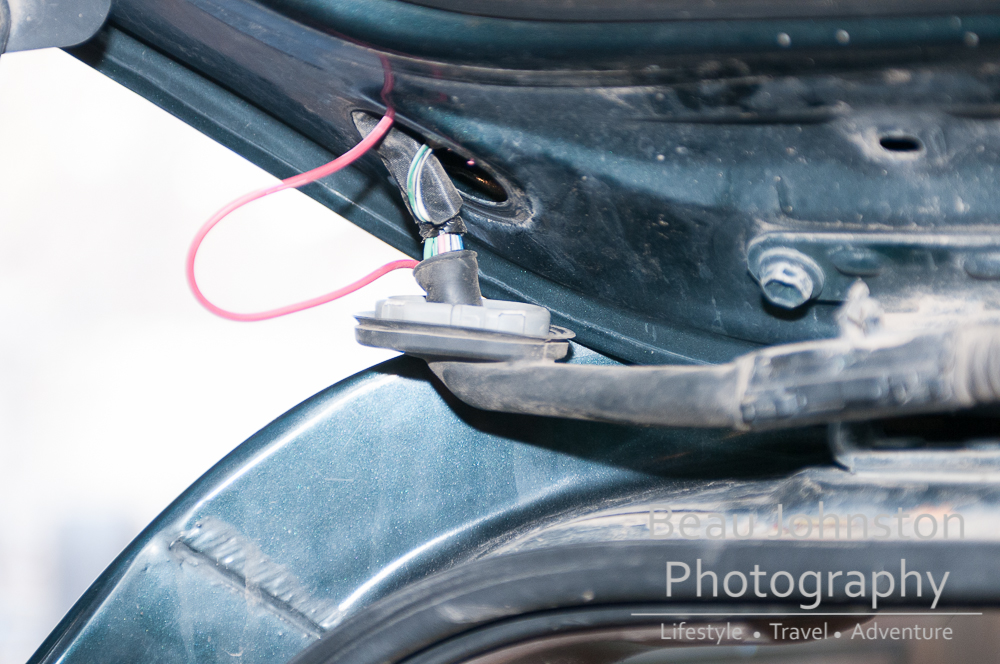 Once the wire was past the rubber boot I could turn my attention to fishing the electrical fish tape through the hatch pillar.  I removed the plastic trim panel from the hatch to gain access to the metal window mechanism cover.  I carefully disconnected the wiring harness from the cover and unscrewed it from the hatch.  I was then able to reach into the opening and find the small opening where the wiring harness travels around the window and feed the fish tape through.  This takes some patience as the fish tape needs to be pushed/pulled/rotated in order to get it to the opening in the top of the hatch.  After a few beers, and some classical music to calm my jets, I was able to feed the fish tape through and grab the end with a pair of needle-nose pliers.  I secured the wire to the fish tape with electrical tape and gingerly pulled the wire through.  I routed and zip-tied the wire along side the wiring harness, careful to avoid the window mechanism, and reattached the metal cover. 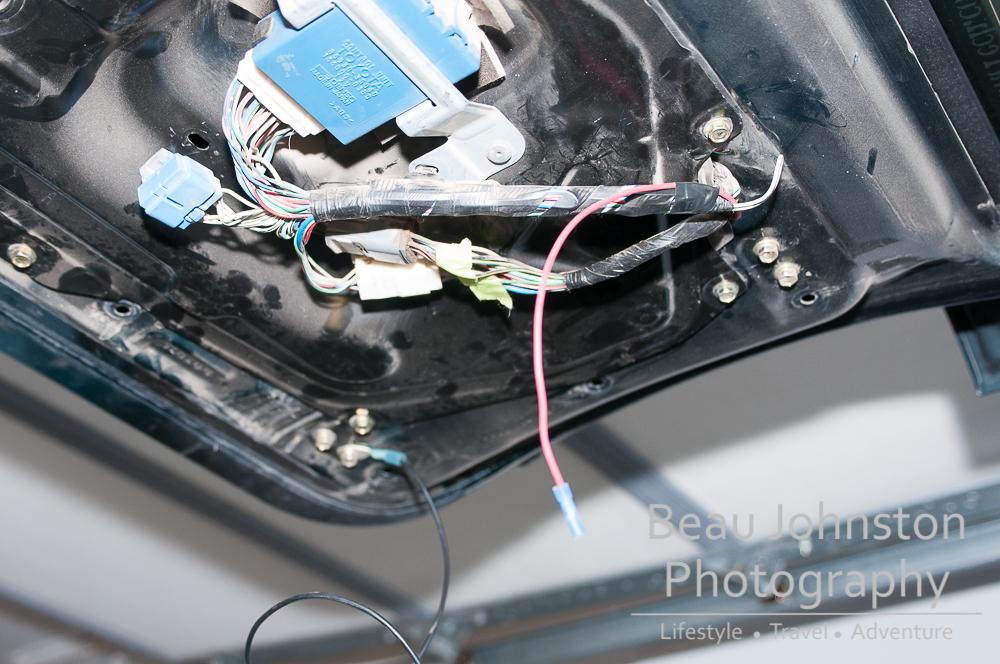 I then determined where I wanted the lights to sit on the hatch, marked and drilled the holes for bolts and wires, and mounted the lights using the supplied hardware from Rigid.  I chose to keep the lights close to the window and roughly centered over the rear drawers. 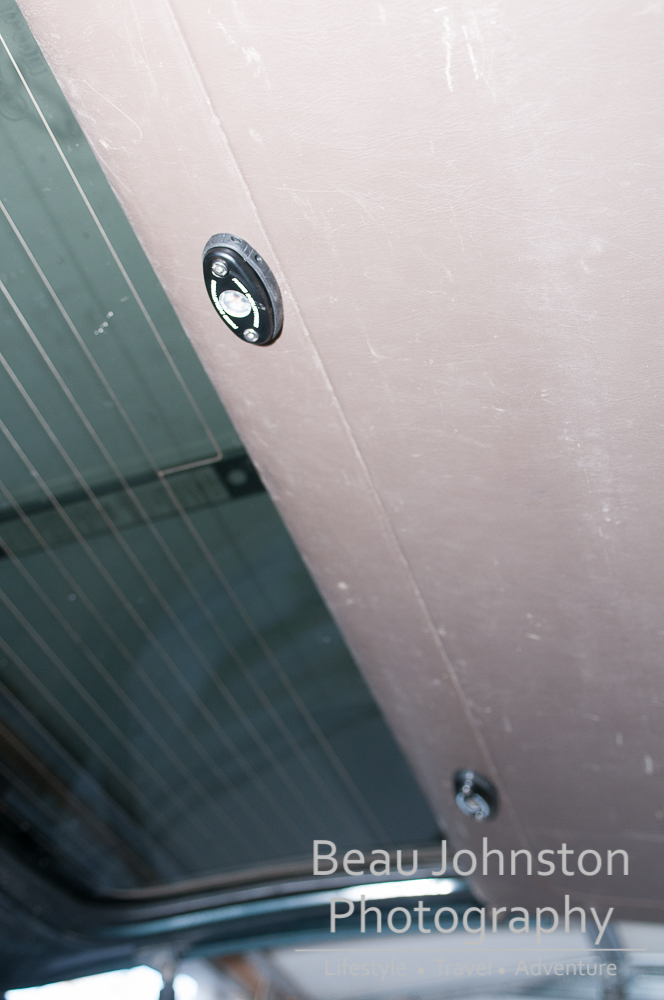 Finally, I used some quick-disconnect electrical connectors to connect the LED wires to the power wire and ran the ground to one of the (several) bolts found on the hatch. 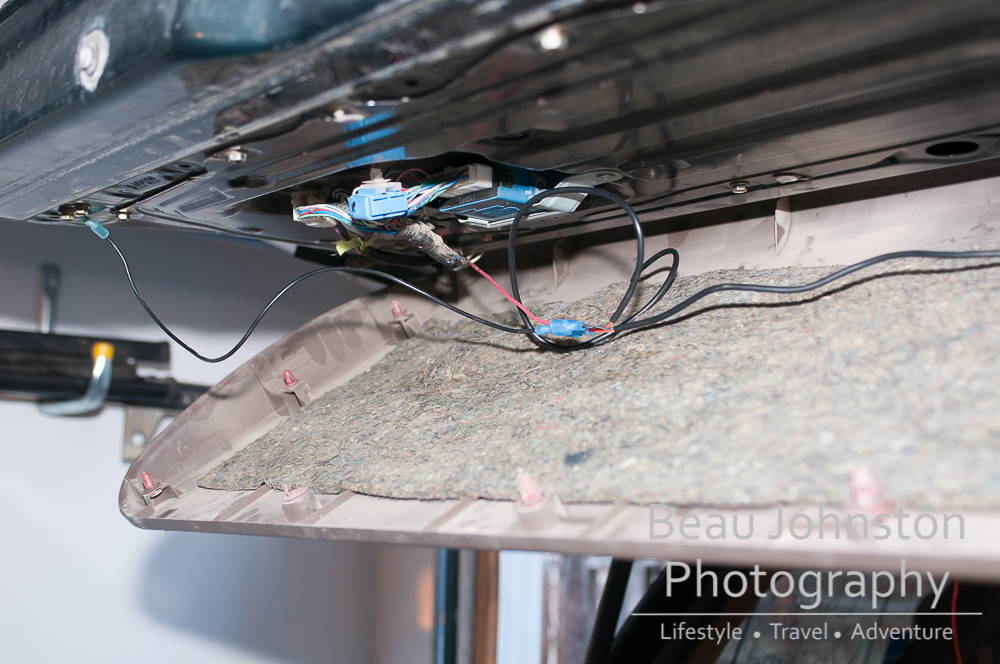 I ran the power wire over to, and down, the D-pillar where I placed a 12-volt relay near the trailer light control module.  I ran power from the auxiliary fuse block I installed in the driver-side kick panel, under the door thresholds, and back to the D-pillar.  I placed a small rocker switch on the D-pillar trim panel and then connected the wires to the relay, lights, and switch, running the ground to a bolt I found under the rear side window. 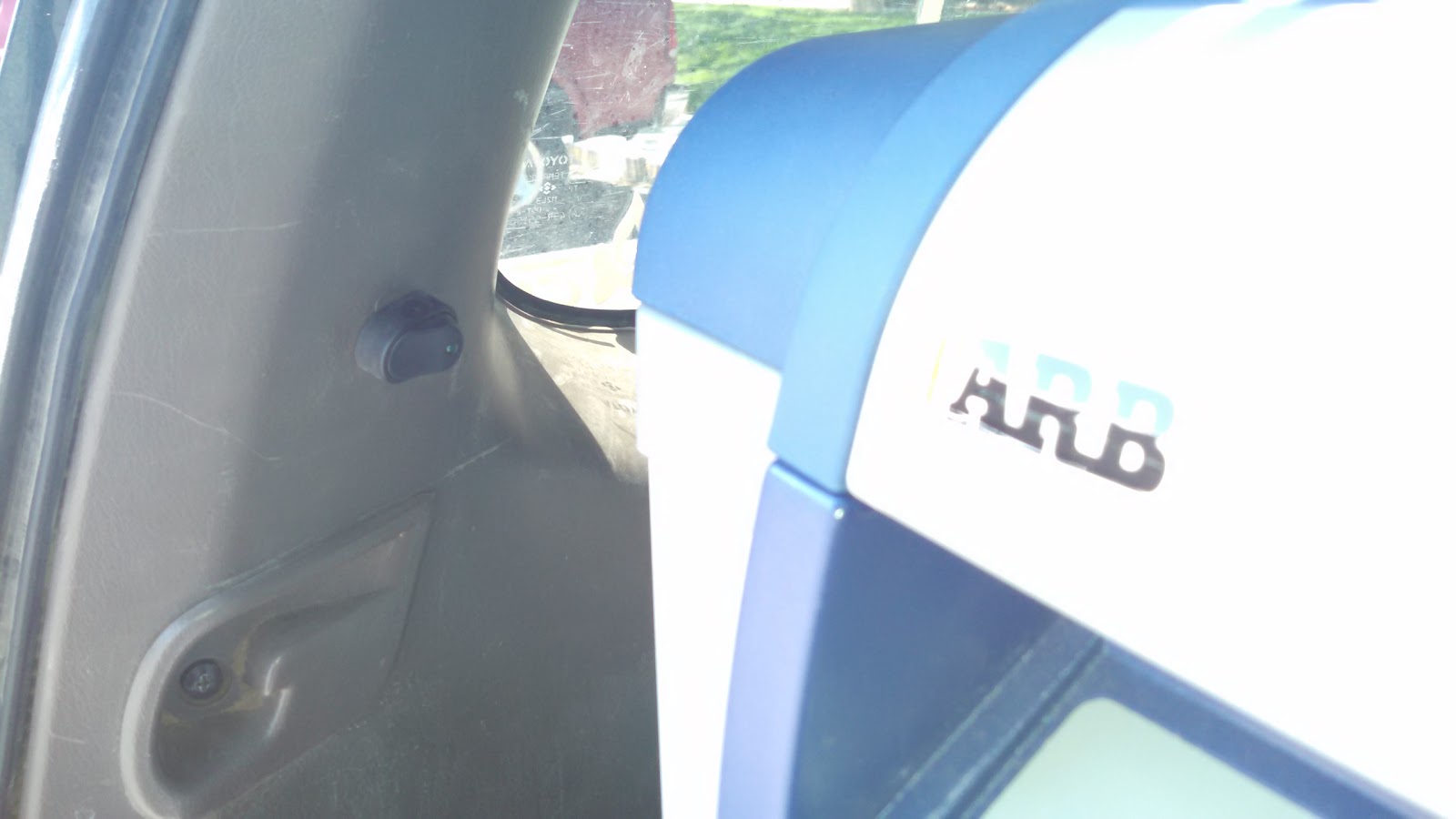 Conclusion:
All I can say is I wish I had installed the lights sooner.  I love being able to roll into camp, open the hatch, flip the switch, and start prepping dinner.  I am glad I went with the lower-power version as two 400 lumen lights would have been too much for the application.  I also don't think I would have liked a single 400 lumen light would have worked as well.  I really like the light pattern from these lights, just a great all-around light.  I would like to thank Rigid Industries for taking a chance on us and hooking us up with the lights.