Here are the top headlines from the Overland, Off Road, Photography, and Outdoor Industries for April, 2017. 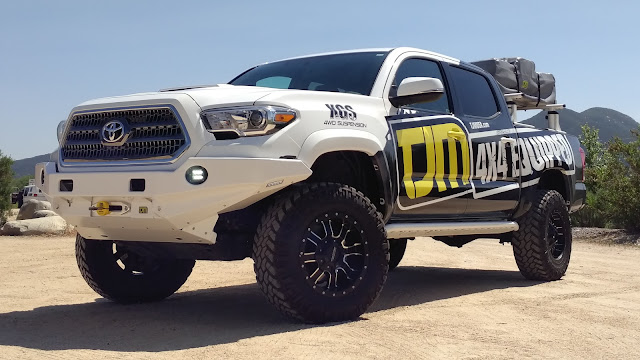 TJM’s all new RockCrawler bumper for the 2016 + Toyota Tacoma is now in final stages of production.

The new RockCrawler bumper has been developed from the ground up to incorporate the maximum available approach angle while offering superior protection to the vehicle. The 12,000lb winch capacity is more than enough to recover your vehicle when needed. The RockCrawler series bumpers include mounting as standard for LED rock lights to light up treacherous terrain and enable safe navigation after dark. Equip your Tacoma with TJM’s RockCrawler bumper and have peace of mind
knowing that your pride and joy has the best styling on the market and the maximum level of protection available.

You can read more about the new bumper here: www.TJMUSA.com


Beau had the privilege of speaking with the iKamper team a few weeks back. Their new Skycamp roof-top-tent Kickstarter campaign closed last week after receiving nearly $2.4M in funding. They actually beat their $100,000 goal in the campaign's first 24 hours - crazy!

Exceeding their goal by such a large amount has caused some problems for the startup. In order to meet demand, iKamper is having to move part of it's production to China. In a statement to their Facebook group the company said,


Production of the tent material (poly and treated poly-cotton) are being moved to China because of the limited production capacity of the factory here in South Korea. The material is actually cheaper for us to obtain here, but with a production capacity of 100-150 units a month we would be shipping KS orders until the end of the year. The quality is in no way being sacrificed. Quality remains one of our priorities, and final assembly and quality control are done at our factory here in Korea.

You can find their Kickstarter campaign here: https://www.kickstarter.com/projects/roominroom/skycamp-the-perfect-roof-top-tent-for-travelers-on

As originally reported in the Huston Business Journal earlier this year, YETI Coolers and RTIC Coolers have reached a settlement that "will require RTIC to redesign some of its products." The lawsuit, filed by YETI, alleged trademark infringement by RTIC and by settling the lawsuit the company is required to

RTIC Coolers posted on their Facebook page the following roll out of new products:
You can read more about RTIC Coolers new products by clicking here: https://www.rticcoolers.com/updates