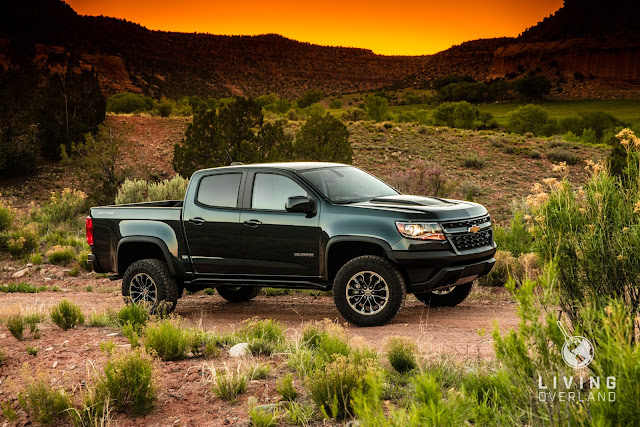 All New Chevy Colorado ZR2 Will Knock Your Skirt Off

Chicks and trucks. I’ve often wondered if girls drive trucks because they have that cool, rough, it-takes-me-five-minutes-to-get-ready-in-the-morning personality. Or do you get that personality from driving a truck? Which comes first? Two of my closest girlfriends swear they will never own anything else so when Chevy invited me out to Gateway, Colo., to test their new off-road ZR2 mid-size truck, it was my chance to understand why. 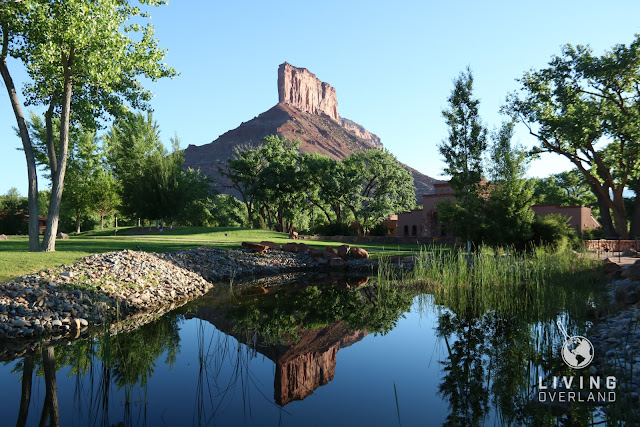 After checking into the desert oasis of Gateway Canyons Resort & Spa, Chevy delegated two, non-truck driving chicks their crew cab 3.6L v6, 8-speed automatic beast. I really felt like I was faking it. The only truck I’d ever driven was one of those Home Depot rentals when I built my deck.
The Chevy staff calibrated the built-in navigation system and said they’d see us at the Off Road Track. The ZR2 was impressively nimble on the highway there. Katie and I forgot we were in a truck while we played with the on-board Wi-Fi and Bluetooth settings for our road tunes. We liked the lighted “vanity” mirrors too as we motored toward the sandy track where racing legends teach off-road skills to tourists. 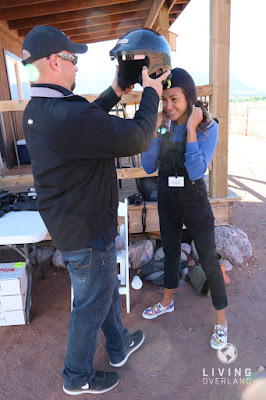 When Discovery Channel Founder John Hendricks envisioned Gateway Canyons Resort, he wanted an adventure getaway that showcased the west. That included driving experiences on byways, through red desert sand, and over Colorado boulders. You could relax by the pool and stare up at the 2,000-foot tall, Mohawk-like Palisade or you could drive; wildly.

The Resort’s Driven Experiences’ Pro-Baja off-road race track was step one in our understanding of this revolutionary new truck. Chevy has strayed away from the off-road market for the last ten years, but with the ZR2, the hiatus is over. Their Multimatic dynamic suspension spool valve (DSSVD) damper technology has created a vehicle for every man…and woman. These spool valves (first seen on the 2014 Camaro Z28) sweeten the ride and handling performance both on and off road because they are sensitive to both speed and position. Now, any driver can feel like a pro…so they tell me as I don helmet and harness that will latch and lock me into the driver’s seat.

Chevy positioned the ZR2 to go head-to-head with the Toyota Tacoma TRD Pro. However, Chevy’s suspension system along with the individual front and rear locking differentials have nudged it ahead of the game.
Chevy’s Lead Engineer Nick Katcherian rode shotgun to coach me on the technicalities of launching over jumps at 40 mph and “yawing”; or was it just to make sure I didn’t crash their $50k vehicle? It turns out the ZR2 is incredibly stable; offering impressive traction and relatively gentle touchdowns. I never felt I would lose control and I wasn’t driving like Grandma.
Press the 4WD selector once, and you’re in Off-Road Mode. Then hold down the traction control button to completely disengage the system. If we wanted those rooster tails in the sand, you could lock the rear differential too.

We played with the various traction modes to feel the truck’s prowess in sand, cornering, jumps and bumps. (Although I didn’t get a chance to try the diesel I-4, we did hear rumors of better gas mileage and power.)

Still whooping and grinning from the Trophy Track, the crew reset our nav system and shoved us off to Bangs Canyon, outside of Grand Junction, where the locals go to practice their rock crawling skills before events like Moab’s Jeep Safari. 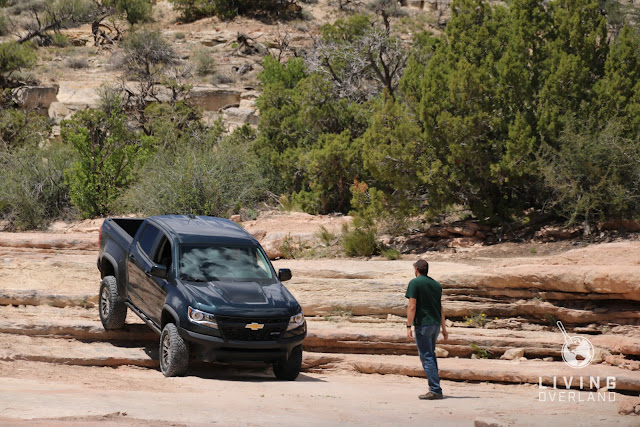 We lined up for a loop track of steep, rocky ascents and descents known as the Tabeguache Trail. With the help of giant 31” Goodyear Duratrac tires and both front and rear diffs locked, we were ready to rock and roll. Literally. Expert guides, positioned about every 10 feet, flagged us like ground crew navigating a 747 into its jetway. My stomach jumped, and I squealed uncontrollably as our truck thumped the first wall of granite. I couldn’t see much because of the huge, sloping hood but I trusted our fearless spotters. They remained solid even with this wide truck pointing right for them and steered by a wild woman who thought more gas was better.

More than once, did they signal me to lay on the brakes. It wasn’t long before I got the hang of moseying the ZR2 through the rocky trail. This truck made the hike feel natural. We deftly traveled over ledges and boulders, supported by the angled bumpers designed to improve the truck’s approach and departure on the steeps, rock rails under the sides to protect it from damage, aluminum skid plates and a two-inch lift that protect the engine and transfer case.

So you might be wondering how this truck compares to others in the market. I’m a newb. I honestly can’t tell you, but I’m sure Google can. What I can tell you is that I’ve never had so much fun in one vehicle in a single day.
If you want a midsize truck that’s equal parts desert buggy, traffic caddy, and rock crawler, the Chevrolet Colorado ZR2 is your guy. No, the ZR2 isn’t a girls’ truck… but it just might make any girl a truck girl.

Jill Adler is a professional writer and editor based out of Park City, Utah. Her love for adventure frequently steers her off the beaten path whether it's driving unfamiliar vehicles or immersing herself in local cultures and events. This professional skier, actor, mom, is presently owned by her Australian shepherd Takoda and forced to stay on the move to keep feet and paws happy. You can read her blog at SkiPlayLive.com and check her YouTube Chanel out – Ski. Play. Live. TV