Exploring the Wilderness around Vladivostok

The world was misty and ethereal. Empty, silent. Amidst the still and transparent water stood the ruin of a square building with vegetation sprouting through the fissures on all sides. The landing stage that once connected it with the shore had collapsed. Next to it were the remainders of a ship-building yard; the rails still lay across the bottom of the lake and in the water rested two large, half sunken vessels. 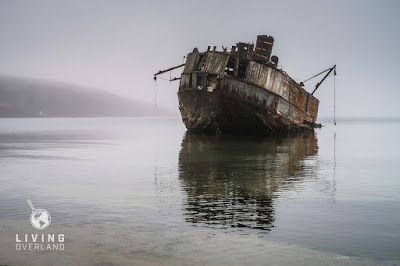 What was the story of the adjacent village? It seemed uninhabited but it was more likely that people were staying inside; it was early April but in Russia’s Far East temperatures were still freezing. A wall depicted a brightly colored painting of flowers with the word ‘Magazin’, – ‘shop’. Coen parked the Land Cruiser and I entered the small store. There was no way I could learn about the village’s history but with the first words of Russian we had learned in our one-week course in Vladivostok, I did manage to buy some food.

The vendor didn’t have takeaway coffee from a coffee machine but did sell cans with hot coffee and I bought one. I pointed at a packet of cookies – called something with ‘afsiankie’, I learned (which turned out to be oatmeal cookies). And when I picked a green bell pepper from a box, the vendor said she had red ones too. I understood all of that and I was proud of myself.

Into the forest and along the shore

We left the lakeshore and entered forest trails that rose and fell until we reached Telyakovsky Bay. It is part of the Far East Marine Biosphere Reserve that protects hundreds of bird species and more than two thousand species of animals and plants that live in these waters. The region is home to, among other animals, the finback whale, killer whale, and dolphins. We would have loved to spot any of these (or other) animals, of course, but maybe this was the wrong time of the year and all were still hibernating in other parts of the planet. 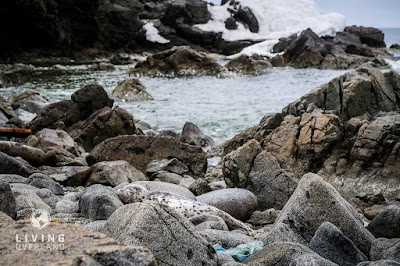 Until I got lucky. Part of the coastline was still in foot-deep snow and I went for a stroll. From the corner of my eye, I spotted something unusual and turned around. A young seal lay on the rocks, her head raised high and I realized she had spotted me long before I noticed her. For a while we stared at each other, I in amazement and she highly alert for any sudden moves on my part. After a minute or so she had had enough, lumbered her heavy body around and disappeared into the water.

While the surroundings were mind-blowing, exactly because parts were still covered in ice and snow, the cold did not invite to take out the camping chairs and eat outside. After our walks we cooked and ate inside, quickly steaming up because both the Coleman stove and the gas heater ate oxygen. To prevent suffocation we left some windows partly open.

The following day we continued farther down the beautiful southern coast of Primorsky Krai. When we had arrived in Vladivostok, by ferry from South Korea, we thought we’d get organized and drive north to Lake Baikal, not expecting any reason to linger since no international guidebook mentions anything about this region. Luckily, I got hold of a local guidebook, which showed a totally new side of this part of the province. With a list of places we wanted to see, we had left Vladivostok a few days earlier and had slowly worked our way down the coast, finding camping spots in secluded bays and on rocky cliffs overlooking the ocean (if mist didn’t block the view). The cloudy and cold weather added to the roughness of the region. I can imagine that in summer these places are packed with vacationers but for now, we were all by ourselves, coming across only a couple of fishermen and hunters in camouflage gear. 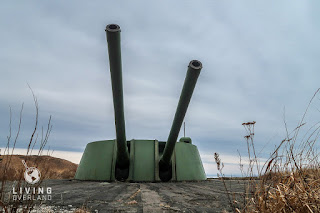 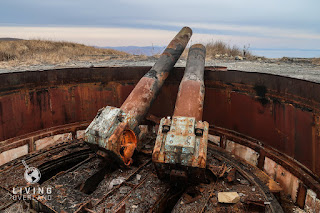 It was a mere six kilometers to the Gamova Cape lighthouse, but we needed a few hours to get there. The forest trail was narrow, rutted and had protruding rocks. We bumped up and down over the uneven terrain, the Land Cruiser crawling in first gear, sometimes in low gear when we were traversing an icy, still frozen river that crossed the trail. We climbed out of the forest, onto a grassy hilltop with a view of the Pacific Ocean, where we stumbled upon some remainders of the Great Patriotic War (as World War II is called in Russia) and/or the Cold War. Of the two coastal tower batteries, one was painted green and in a reasonable state, the other had completely rusted away. Visitors had cut pieces from it to keep as souvenirs. Each had two heavy-caliber guns; a sign explained that they had a reach of 37 kilometers. Around these tools of war stood the ruins of houses and we came upon an entrance to an underground bunker, which was closed off by a locked fence. 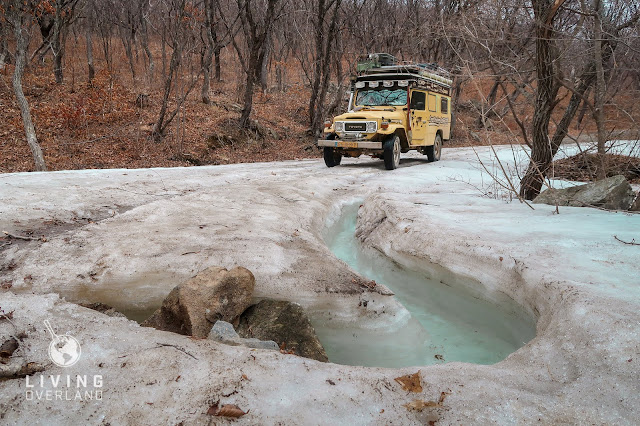 The Land Cruiser rolled downhill along a trail that hugged the grassy hill until we were stopped by a fence. The lighthouse was there all right and stood amidst a couple of houses on the Gamova Cape but we couldn’t reach it. The cape and lighthouse were named after Dmitry Gamov, one of Russia’s explorers in the 19th century. The cape is dangerous due to strong winds and frequent fogs and in earlier times, locals lit candles and prayed in chapels before sailing these waters. Early 20th century they built a lighthouse. It is still in use although with modern equipment and no longer depending on the original bell made of bronze, copper, and silver that was used to warn ships in foggy weather. Apparently, the bell is still there and I would have liked to have seen it.

Looking at it from a distance we speculated it to be a summer destination and that nowadays, these houses served as restaurants and accommodations for summer visitors. Never mind, we had our own home on wheels so we turned around, drove back for a while and turned left down a steep incline onto a trail. Where would it take us? A severely rutted and potholed track cut through dry yellow grass and meandered across a narrow peninsula. With translucent bays on either side, lined by rocky slopes it was a marvelous stretch of off-roading. While I drove Coen experimented with our recently acquired drone, trying to capture this wildness from the air. 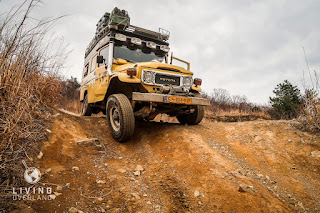 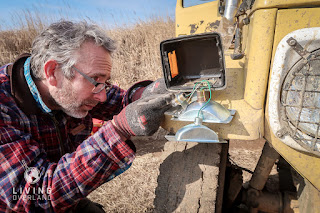 When the sun was coming out we leaped out of the Land Cruiser, ready to stretch our legs and inhale the fresh air. It was also time to fix the indicator light that had broken off due to the bad roads – off-roading always comes at a price. It was a necessary preparation before our return to the inhabited world of asphalt roads and, ultimately, the start of our journey north.