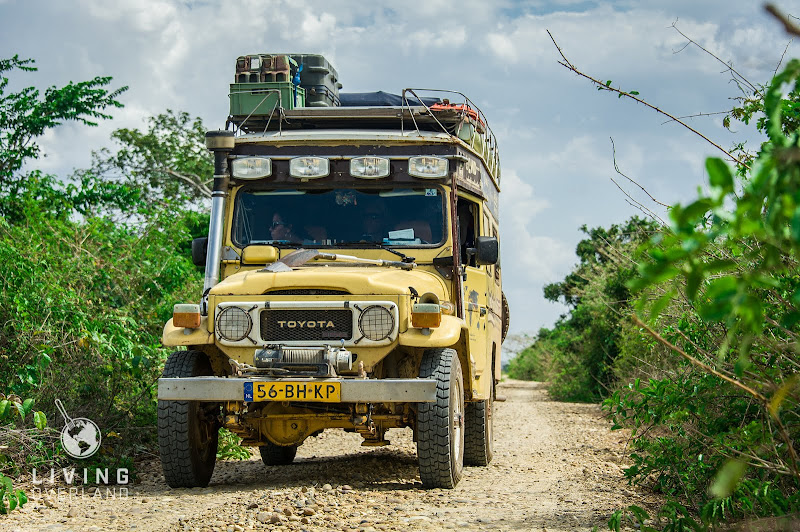 It was impossible to enter the bank. The doors were locked and the conversation with the guards took place through the narrow opening of two glass doors. Due to the constantly recurring power failures, the computers didn’t work and so the bank was closed. Fortunately, in Venezuela, they still used old-fashioned quarter phones and Coen had a business card with a phone number of the woman who had offered to exchange our US dollars for bolivars.

“I’m on my way,” she replied and fifteen minutes later she handed us a large, heavy plastic bag. “Here, please count it, I need to talk to people in the bank,” she said and disappeared behind the glass doors without asking for our 300 US dollars.


A Cheap or Expensive Country 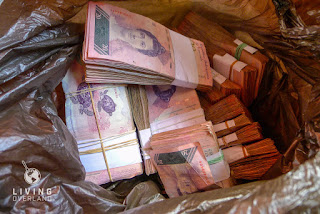 We got into the Land Cruiser that had all blinds drawn. Hiding in a car with a bag full of money made us feel like criminals. How do you count dozens of stacks of 20-bolivar bills that total 60,000 bolivars? And where was I going to keep it all in the Land Cruiser? We took her word for it, paid our dollars and were on our way. By the time we left Venezuela five months later, we could get 3,5 times as much (and today, 2018, inflation is impossible to keep up with at all).

It is terribly contradictory: for foreigners, no country is cheaper to travel in than Venezuela whereas it has become unaffordable for the Venezuelans themselves. Shortages were growing by the day, including basic necessities such as toilet paper, soap, and milk powder for babies. The black market, on the other hand, was flourishing.


TLC for the Land Cruiser

We drove to the Toyota Garage in San Fernando de Apure, the address given to us by Ramon. He had emigrated to the US while his family was still in Venezuela. We had never met but Ramon followed our journey online and insisted we’d get the Land Cruiser’s fluids replaced at ToyoKelly, owned by his father-in-law. 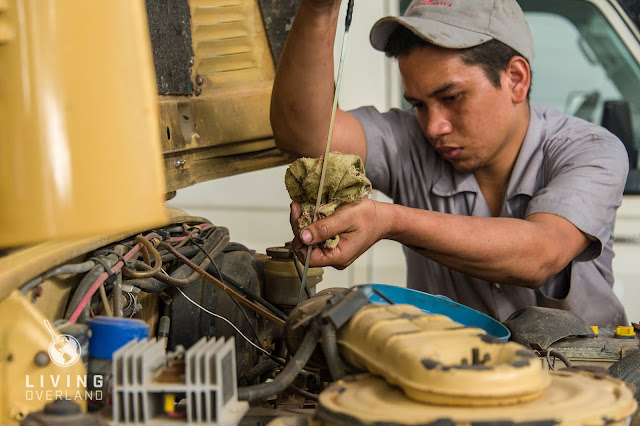 On arrival, the large workshop was practically empty. The showroom, like any other car showroom in this country, was also empty as if its construction had just been completed. Car dealers no longer had sufficient dollars to showcase new vehicles; the ones they managed to sell had been bought long before they actually got imported into the country. We chatted with the employees while one of them replaced the oil and they gave us the tip to visit Hato Frio. Always interested in following up on suggestions of local people, we decided to check it out and were on our way. 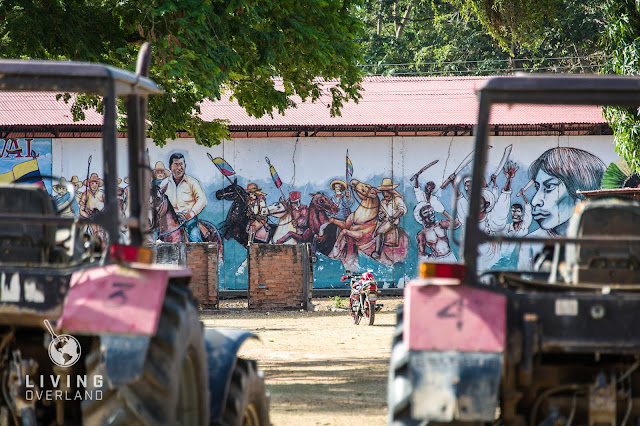 Once a flourishing ranch with 45,000 cows, Hato Frio was a profitable business that was destroyed the moment the government nationalized it. “At that point, it always goes wrong,” was the saying we heard over and over again. Nowhere in Venezuela had there been a success story of nationalizing a private company. The ranch now owned a mere 12,000 cows and tourism was down to zero. The place had been renamed Hato Maricela and murals depicted Venezuela’s heroes: Bolivar (the founder of the country), Che Guevara, and Chavez. 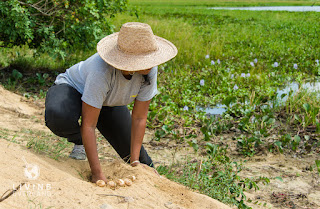 The ranch lies in Los Llanos, the vast plains that stretch across parts of eastern Colombia and southwestern Venezuela. The grasslands are largely used for cattle raising but some areas have been designated as national reserves. Part of Hato Frio lies in one of those reserves. The road to the farm characterized our surroundings for the next couple of days: endless asphalt cutting through a monotonous landscape of wetlands and grasslands. At the entrance of the farm, we talked to the guard, who talked to his boss on the phone and, to our surprise, fifteen minutes later we not only met the boss but she was more than willing to show us around. Arelis had been hired recently to revive the tourist part of the business as well as improve the protection of flora and fauna. She was keen on showing the potential and beauty of this ranch. I crawled in the rear of the Land Cruiser and Arelis took my seat. All afternoon we crisscrossed the farm, large parts of which were for wildlife only. One of Arelis’ activities was the revival of the caiman nursery with the goal to increase the number of reptiles in Los Llanos, as many had been killed over the years. Once upon a time caimans of twenty-six feet long lived here, she said, but they had all been hunted down. Along the shore, the ranch workers had deposited heaps of white sand in which caimans laid their eggs, which Arelis took to the breeding center where their chances of survival were much bigger than in the wild. A year later the offspring would be released. 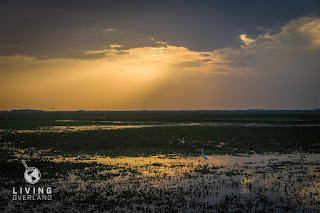 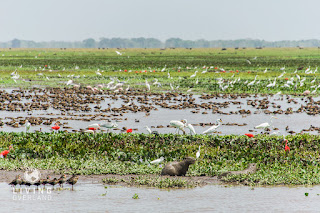 At the end of the hot, humid afternoon, wildlife awoke. We drove across an artificially elevated path through wetlands. All around us flew, sat, swam, and lay hundreds of caimans, capybaras, deer, plus thousands upon thousands of waterfowl. With the heat gone and a breeze flowing through the open car windows, it was a delight to be here. The sun performed its own theater with its rays and colors playing around the slightly cloudy sky. When Coen turned off the engine we were blown away by the cacophony of all those animals. 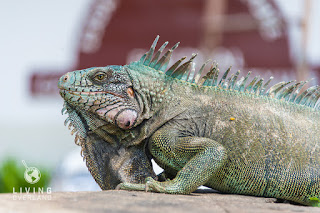 As we left the farm the next morning, a guard was waiting for us. He asked if we were willing to take him to the next farm, Hato El Cedral. Of course, that was no problem. El Cedral is the second farm famous for its nature reserve and you can’t enter without a reservation or invitation. By taking the guard to the hotel we got in, were allowed to walk in the garden to watch massive iguanas climbing in and out of trees. On our return to the main road, we stopped along wetlands that were home to zillions of herons, ibises, ducks, spoonbills, falcons and birds of prey. What a fantastic way to start our journey in Venezuela!


A Festival in Venezuela’s ‘Monument of Folklore’


“Elorza! - you have to go there!” It was a repetitive comment, an order almost, from many people we spoke to. Elorza was Chavez’ place of birth and just before he died he declared the town a National Monument of Folklore. People let the rest of the world know they were going to the festival by writing it on their car windows with white shoe polish, particularly when they were single and in search of company. 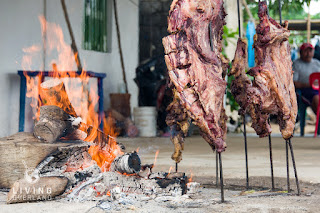 Happy people dressed in jeans, checkered blouses, and cowboy hats were walking and sitting all over town, many with a beer in hand. Road stalls sold hammocks and hats. People were roasting massive pieces of meat on skewers around wood fires. They greeted us, gave thumbs up and continuously asked for our photo. If Chavez were alive, he’d be jealous of the attention given to us, no doubt.

Still new in the country, we hadn’t figured out yet how safe it was to park the Land Cruiser. People told us quickly and clearly that this was no problem in Elorza. “Just leave it here, we’ll watch it,” a picnicking family offered. They had settled on a piece of grass and offered us a beer. It turned out that they had been following our journey on Instagram. 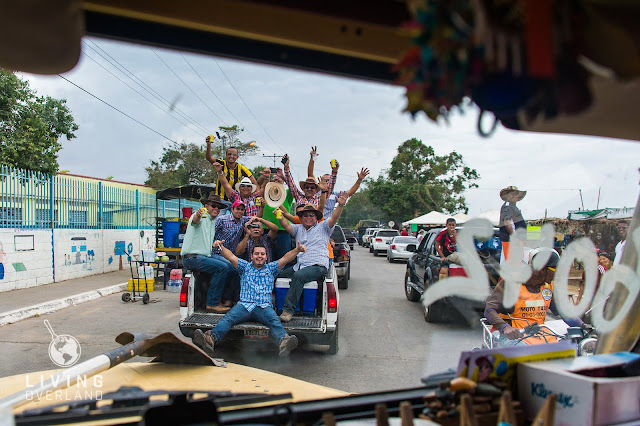 The reason for this festival was, among other things, to honor traditional dances. Frankly, we didn’t see any of that apart from a somewhat sad performance by kids on a plaza. This seemed to be more of a weekend consisting of one massive, 21st-century party with lots of drinking and laughter. When we asked for a place to camp they sent us to Jorge Guerrero’s farm, a famous musician. His farm was just outside town and easy to find. Part of it had been turned into an off-road terrain where hard-core 4x4 guys were competing in pushing their heavily modified trucks through a deep mud hole. The crowd stood on cars around it, cheering them on.

Down the road stood many heavily outfitted cars. We were instructed to park the Land Cruiser and join the party. That was easy enough. To our surprise the majority, however, returned to town that night, driving their cars while heavily inebriated. It appeared that the hard-core off-roaders did carry a rooftop tent on their vehicle but preferred sleeping in a hotel room. There was no way we’d go on the road with that drunken crowd. We drove the Land Cruiser to a remote corner of the field and set up our rooftop tent under a leafy tree where the sultry heat resulted in a sleepless night. The few locals who also camped didn’t have that problem at all. Why not? They camped the Venezuelan way: with an aircon in their rooftop tent!