No two people have done more to train a community or promote a lifestyle the way Roseann and Jonathan Hanson have with the overland community. Their Overland Expo event grew from humble beginnings into the preeminent overland event for North America, attracting media coverage from the likes of Outside Online and Motor Trend.

I will always have a special place in my heart for Overland Expo and see the event as a major driver in the success of Living Overland. Two years after Krista and I started blogging, the Overland Expo Team tapped us on the shoulder and asked if we would be interested in teaching cooking classes at the event. I believe my official response was, “What? Are you kidding? Our exposure at Overland Expo attracted the attention of the team at Toyota Cruisers and Trucks Magazine, where I eventually worked my way up to being the Editor in Chief from 2015-2017.


As one might expect, I am incredibly thankful to Roseann and Jonathan for their support of Living Overland. I can honestly say that without Overland Expo, Krista and I would not be doing the things we are doing or have the amazing friends we have in the community.

After last month’s announcement that Lodestone Events had acquired Overland Expo, I interviewed Roseann to learn more about how she and Jonathan got their start overlanding and what is next for the couple. Once again, I am thankful for her support and willingness to let me share that interview with you.

We are both authors and naturalists, and have a diverse background: after we married in 1984, we have worked as resident naturalists for U.S. Fish and Wildlife; managed a nature lodge; taught dozens of nature and writing workshops; lead safaris in Kenya and Tanzania; and explored five continents together. Roseann worked in the American West and East Africa as executive director of several conservation organizations, racking up thousands of miles of overland driving on her own in Mexico, Kenya, and Ethiopia. Jonathan has collaborated with Tom Sheppard on a reprint of the seminal Vehicle-dependent Expedition Guide. Our books have won several awards, including a national book award, and a National Park Service award for Interpretive Excellence.

Where did the two of you come up with the idea to start Overland Expo?

Jonathan was co-founding editor of Overland Journal in 2007, and he stopped all other work to put his writing, editing, and photography talents into building that. During that time it was clear I needed to do something else to help support us financially, and I had many years experience running educational and professional events for groups such as the Audubon Society and Smithsonian Institution’s travel division.


Since overlanding was so new to the U.S., I thought a combination trade show (to support budding businesses like Overland Journal, Adventure Trailers / AT Overland, and Equipt) and educational event would be a win-win. I had just met and befriended the legendary trainer and Camel Trophy veteran Tom Collins when I was covering a Land Rover event for Overland Journal, and Tom agreed to be our first VIP trainer, along with Lois Pryce, who had come to the U.S. and visited us at our Ravenrock property in the Sonoran Desert.

Why did this type of work interest you?

For me, it was important to provide an all-new way to promote travel by vehicle and motorcycle that wasn’t about “wheeling”—that wasn’t only about conquering obstacles. Overlanding (something I grew up doing with my parents, camping around the West and Mexico) is about the journey, about exploring new places and meeting new people, experiencing different cultures. My parents got that and passed it on to me.

And frankly, another important point for me was to create an event environment that was equally attractive and welcoming to women and families. I hated going to the existing “off-road” shows and seeing all the “spokesmodels” in bikinis with their chests hanging out, on display like objects. We succeeded in making Overland Expo very much a place where women could learn and explore new skills and not feel the taint of objectification and lack of respect. We also provided free daycare so the wives would not always just get stuck being the caregivers.

How did creating the charitable organization ConserVentures change your perspective on Overland Expo's impact on the community?

I founded ConserVentures before Overland Expo; it was my consultancy for the work I did in East Africa and in Mexico. Much of what I did tied economic development through eco-tourism (including overlanding) to conservation projects for local communities.

At first, I thought I could make Overland Expo a part of that, but it had to be separate, per IRS rules for a variety of reasons.

ConserVentures became a non-profit in 2011. Overland Expo remained an Arizona LLC and was my main business project — I had to stop working on the other consultancies because it was growing so much.

Can you talk about the impact ConserVentures has had since its founding?

I’m most proud of our Change Your World Fund, which we developed with the parents of Alistair Farland, a 24-year-old Australian who was an instructor for us at Overland Expo 2014 EAST. He wanted to inspire his generation to explore their world and impact their society. He believed that "pushing yourself out of your comfort zone" is one of the keys to life.

In just a short while—a few months into his overland motorcycle journey exploring the Americas—he made dozens of friends and inspired many to think beyond themselves. Although he died in an accident in fall 2014 on his journey, his passion and inspiration did not. The Fund supports people like Alistair whose overland journeys and projects go beyond the “me” and seek out strangers and challenges.

To date, five people have been supported on some great projects, including the latest, Kirk Williams, who is journeying from Boulder to Ushuaia in his Transit van. Kirk is a quadriplegic. He’s incredibly inspiring. You can follow him on Instagram @spock-the-van. He’s currently on a shake-down journey in Baja, working out the last bugs in his new rig.

How have your and Jonathan's lives changed since founding Overland Expo and ConserVentures?

It’s somewhat ironic that Jonathan and I, like many of Overland Expo’s attendees, are actually loners and prefer to be off exploring on our own. We really aren’t “group event” people! But a couple times a year we really enjoy hanging out with a group of like-minded nomads. Many of the attendees and staff of Overland Expo have become lifelong friends—and our de-facto family.

With Lodestone Events acquiring Overland Expo, will the event continue to fund ConserVenture's projects and programs?

Yes, we worked out partnership agreements to continue to have ConserVentures receive fundraising support from the overland community.

What is next for you and Jonathan?

We’re returning to our roots as writers, artists, and explorers. Jonathan just published his first fiction, a set of short stories; I did the art and produced the book. We are also returning to Africa this summer for some extended overland exploration; we shipped our Australian Land Cruiser Troopy to Durban late last year. We have some projects planned in northern Kenya, through ConserVentures, after we explore southern Africa.

We both maintain blogs on our Exploring Overland website, including Jonathan’s popular Overland Tech and Travel. We also sell our books on that site, and we will continue to offer small, bespoke custom training workshops for overlanders, writers, and artists.

Both of us also will continue to teach and write for Overland Expo.

Beau Johnston is an engineer, writer, and photographer who is dedicated to proving you can find a balance between work and life. He is the Co-Founder and Publisher of Living Overland, former Editor in Chief at Toyota Cruisers & Trucks, and a member of the Rocky Mountain Automotive Press. When he isn't working, you can find him exploring National Parks, fly fishing, and camping with his wife (Krista) and their two dogs. 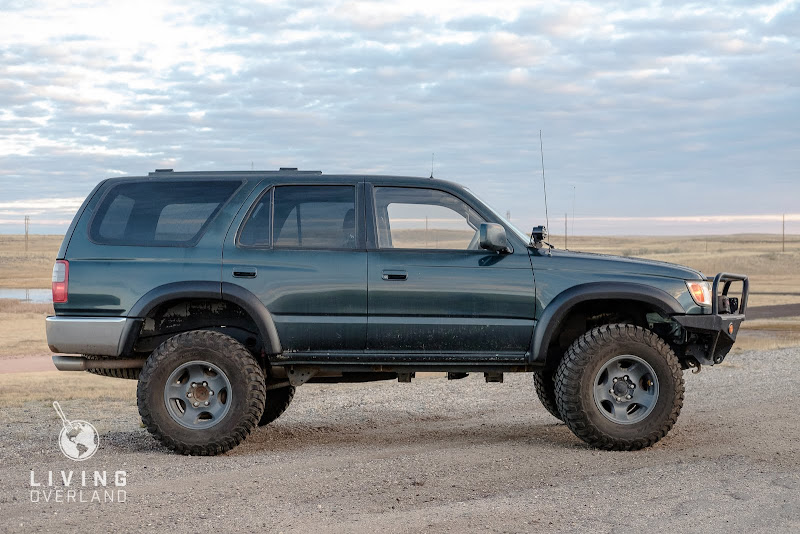