While in Valdivia, we decided to venture out and visit the coastal towns of Corral and Niebla. While driving to Niebla we thought we were approaching some inclement weather, only to learn that we stumbled upon Niebla’s namesake (the Spanish word for ‘fog’). The city is thickly blanketed most days; the saying goes that if the weather is nice in Valdivia then it is definitely foggy in Niebla (and if the weather is bad in Valdivia it is only slightly foggy in Niebla). Niebla is a tiny town, but is home to an old fort that was used to protect Valdivia from invaders. The fort includes a small lighthouse, a museum, some of the original fort walls as well as some old cannons. Near the cannons are kilns that were used to heat up cannon balls so that when the red hot cannon balls struck invading ships they not only caused damage, they caused fire. 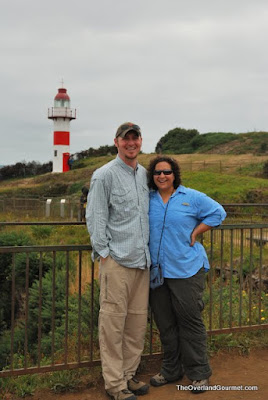 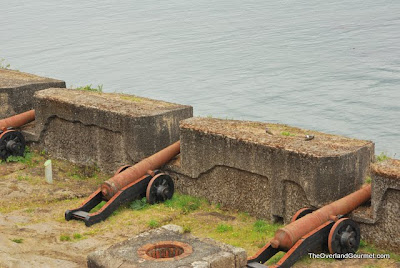 A couple of days later we decided to venture out to Corral. Our host mother asked if we knew how to get there and we said yes—we had seen signs as we drove into Valdivia for the road to Corral. We drove, drove, and drove some more (almost two hours), all the while beating up and abusing our poor little Hyundai rental car. We made our way up and down hilly, muddy dirt roads and took tight corners next to steep drop-offs that would make my mother-in-law want to hold on to any oh-shit handle available. The Wabrek-Johnston clan rejoiced in the crazy ride through the Eucalyptus and Araucaria Araucana forests. The Araucaria Araucana trees (a phrase I still cannot correctly pronounce) are very old evergreen trees that only grow between the 37th and 40th south parallels. They have very interesting triangle-shaped needles and many people grown them as specimen trees at their homes.

Once in Corral, we learned that the best route to the town is by driving to Niebla and taking a short ferry ride across the river—a mere 45-minute trip. We drove around Corral in a matter of 15 minutes and saw there was yet another fort to discover. This fort was seemingly unchanged from the time it was build; probably due to the remoteness of Corral. The 10 foot deep fort walls were home to numerous cannons and several lookouts. There were two arched passageways from the inside of the fort to the waterside. We stumbled upon the fort as some locals were reenacting a battle between Chile and Spain. Once the reenactment was complete, the teenage boy actors already soaked from the rain and wrestling around in the mud, made their way through one of the arched passageways and enjoyed a swim in the bay. I can only imagine the water was freezing—we were chilly standing outside in the rain and the water was full of runoff from the nearby Andes Mountains.

Back to Traveling through Chile