Traveling through Chile - Chiloe Archipelago B 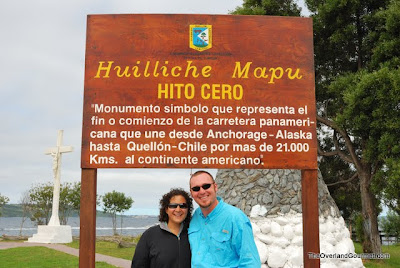 While staying in Castro, we took numerous day trips to take part in some of what Chiloé has to offer. One of Beau’s must-not-miss spots was the southern-most point on the Pan-American highway. We had visited Anchorage (the northern starting point of the highway) just eight months prior, so we made our way to the small town of Quellón to visit the Pan-American highway end marker. After taking pictures and walking along the beach at the end marker, we decided to pick up lunch and walk around downtown Quellón. After looking in gift shops throughout Chile for mementos for our families, we were numb to the woolen goods, knick knacks, and wooden handicrafts of all sorts. We anticipated finding nothing out of the ordinary in Quellón because of its size, but we wound up on a back road and stumbled upon a gentleman carving wood into magnificent pieces of art. He was in the midst of creating a series of pieces for the Quellón high school, several of which I truly wish was for sale. He allowed us to wander through his little shop and look at his handiwork. While walking on top of the curls of wood all over the floor, Lara found a carving of a pier and sailboat that would fit in our luggage. The piece, which cost about $70, took the craftsman over eight hours to carve. 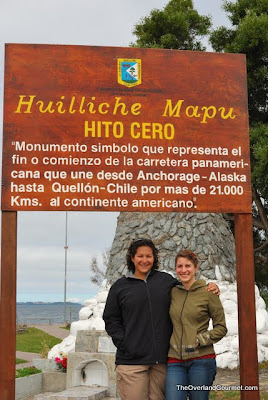 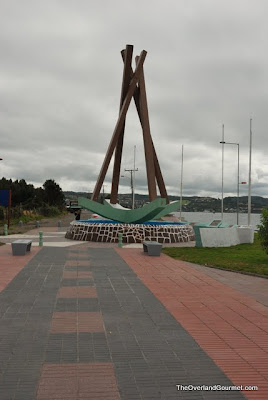 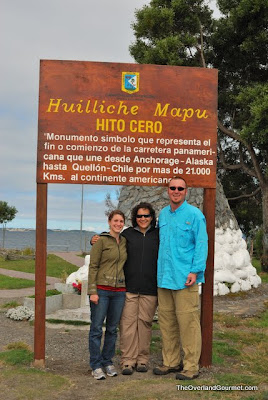 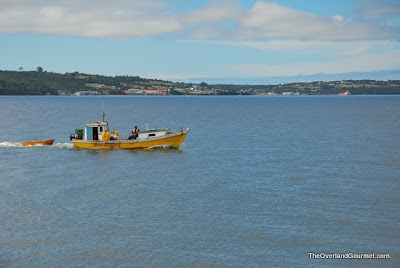 On a separate day our travels took us to Parque National Chiloé. Unlike the national parks in the U.S., this park barely had a sign letting you know you had arrived. We parked alongside the road and climbed up the steps to get over the fence and enter the park. After meandering along the trail, through thick vegetation in places and under a canopy of trees in other areas, we came to some beautiful sand dunes. Cattle were allowed to graze on the grass near the sand dunes, so we had to watch our step when walking barefooted. After ascending the dunes we were amazed to see a seemingly endless sand beach. The weather was cool and it was very windy, but it did no deter the Wabrek-Johnston clan from meandering down the beach for several miles. When walking barefooted, we had to watch every step to make sure we didn’t step on any of the razor-sharp broken shells abundantly scattered on the beach. We came upon the rotting carcass of a large whale; the windy conditions made us glad we didn’t have to smell the decomposing beast for more than a few minutes. After being wind ravaged for several hours we happily returned to the protection of our car. We now understood part of why there were few inhabitants of the west side of the island—the wind was so fierce that, at times, we had to tuck our shirts into our pants to ensure they didn’t blow off. The strong Pacific winds, storms, and semi-frequent tsunamis have ravaged the west coast of Chiloé preventing all but the most stalwart residents to head eastward. 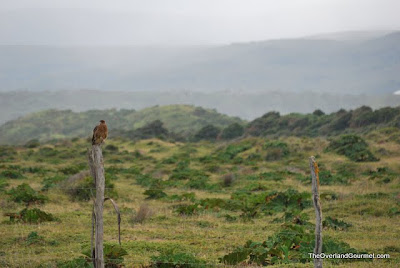 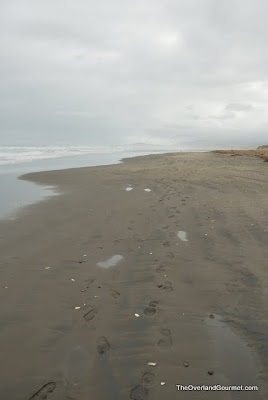 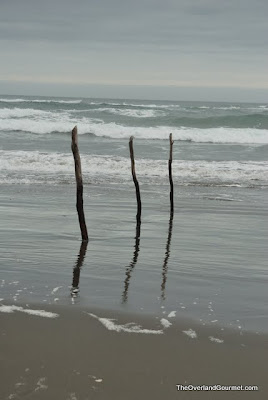 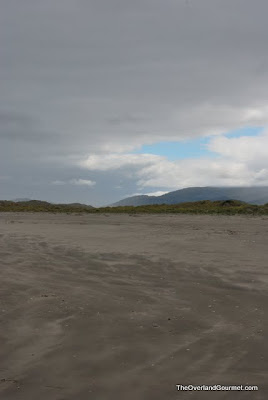 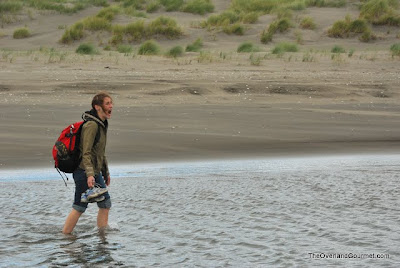 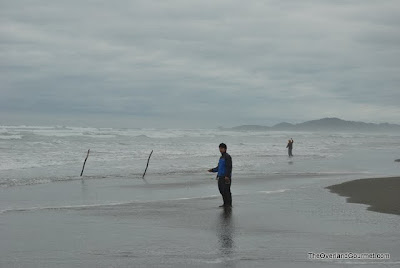 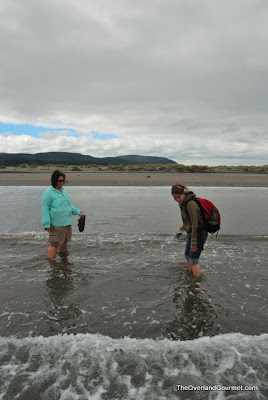 On the way back to Castro from the national park we stopped by a very small mini-market for some snacks. Lara entered the 10 foot by 10 foot market first and the shop owners looked at her eye to eye (she is 5’2”). I was the next to enter the shop and they looked up to me (I am 5’6”)—they were a little surprised by how tall I was. Next, Beau ducked through the doorway into the shop and the owners’ jaws dropped and eyes became as large as saucers; they must not have ever seen such a tall gringo (he is 6’7”). The last adventure we had planned for our time on Chiloé was to visit the Humboldt and Magellan penguins that were nesting on some little islands off the cove of Puñihuil. We planned to get up early, get our stuff packed, and drive north to Ancud to pick up the bus so we could take part in the tour. Waking up to rain, and being groggy from watching old movies the night before, we all decided to sleep in and bypass the tour thinking that we’d be miserable with the awful weather. Once we came to our senses and when the skies opened we decided to try to visit the penguin colonies without the tour bus. Our trusty little Hyundai took us up and down bumpy, steep and slippery roads until we arrived at Puñihuil. We had to traverse a stream and drive on a beach to get to the parking lot, but with Beau’s master driving skills neither of these posed any problem. To our excitement, the bus ride was not a requisite to seeing the penguins. Lara and I hopped on board the boat and enjoyed the wavy ride to see the tiny penguins, sea otters, red-footed cormorants, and numerous other sea birds. Beau, fearing that he’d become sea sick, stayed behind and took photos along the cove. 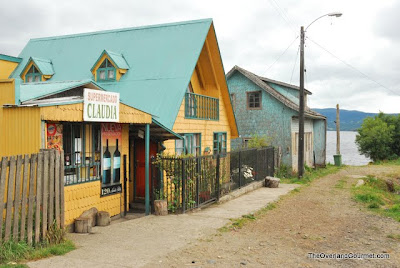 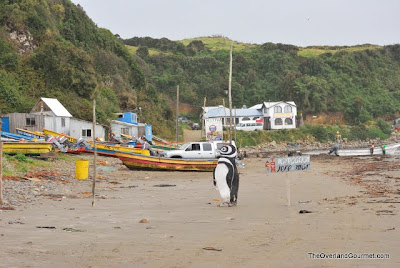 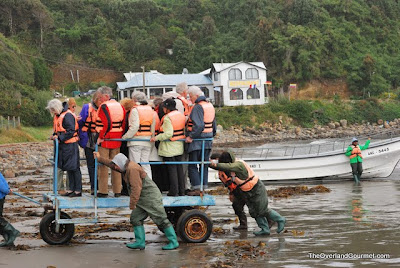 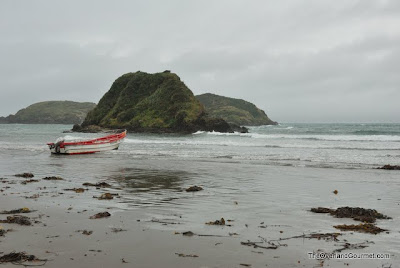