Pleasantly surprised was our first thought of Te Anau, the somewhat touristy town sitting in the western part of the island, on the edge of Lake Te Anau, and on the road to the Milford Sound.  This little hub had just the right number of restaurants, hotels, activities, and shopping opportunities (including several good grocery stores), and did not have the pretentious air we noted while later visiting Queenstown.   We found an advertisement for the Fiordland Great Views Holiday Park and noted their nice bathroom photos, so the women made the governing decision to stay there; it was a great decision.  The rates were very reasonable and the bathrooms were impeccable and there was never a wait for a morning shower.  The community kitchen setup was also quite nice; a large refrigerator was available to store perishable goods.

We normally try to do as few guided tours while on holiday to get the most authentic experience, but Te Anau had some tour locations that were only available to those taking part in Real Journeys tours.  Our first tour was of the Te Anau glowworm caves (there are other glowworm caves found in New Zealand).  We embarked a large ship in the downtown area, road across the South Island’s largest lake where we learned about the over six feet of rainfall per year in the area and the famous Milford Track.  This 53 kilometer tramp (NZ for hike) through the Beachwood rainforest from Te Anau to Milford Sound is described as the “finest walk in the world” and takes visitors six days to complete; each night there are cabins or other lodging options available to trampers.  Besides the Milford track, most of the surrounding mountains are off limits without proper government permits or clearance; there is a severely threatened species of flightless bird that inhabits these forests and the government is making great strides with their repopulation efforts. 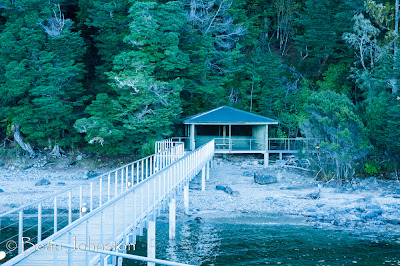 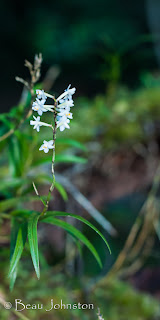 After a thirty minute boat ride we arrived at the glowworm cave entrance building where we were given the requisite safety information as well as information on how we should behave in the caves.  No photography nor speaking is allowed in the glowworm areas, as the light and sound make the luminescent creatures “scared” and they respond by turning off their lights.  The glowworms are actually Arachnocampa luminosa, or a fungus gnats, and are attached to the ceilings of caves as larvae by their mothers.  As larvae, they spin silk, drop the threads several inches down into the cave, coat it with a poisonous mucous (gross, I know), and turn on their glowing mechanism to attract flying prey; the more hungry the larvae are they brighter they will glow.  When prey are captured in the silk threads the larvae feels the vibrations, pulls up the thread, and devours its meal…and yes, we paid to go see this.  This particular cave system had two parts—the river and the grotto; the river section was lit so that the waterfalls and other features could be seen, but the grotto was going to be completely dark…except for our little larvae friends. 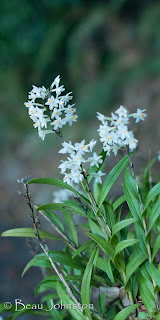 Each large tour boat carried about sixty people, but the cave and glow worm tours were broken into groups of eight to twelve.  While waiting for our tour to begin we took a short nature walk through the rainforest outside the building; we saw some beautiful ferns, mushrooms that must have been poisonous, and saw some tiny white orchids growing on the side of a mossy beech tree.  Although the few blooms we saw were each as small as a single lilac flower, they packed the delicious and strong aroma of sarsaparilla which could be smelled from several feet away.

Sorry folks, no photos from inside the cave

When it was our turn for the main event we crouched through the stone cropped entryway, onto a permanent metal scaffolding system, into the dimly lit cave and immediately noticed the swift river rushing below our feet.  As the tour guide led us through the cave he noted areas where we could actually see the glowworm silk, several cave waterfalls, neat features carved out by the surging river below, and small areas where glowworms were found outside of the grotto.    The cave was quite cool so we were bundled up in our jackets and rain gear, but every so often the spray of the river or the occasional drop of water from the ceiling would land on our faces and jolt us wide awake.  At the entrance to the grotto we were left standing in complete darkness for several minutes waiting for a small flat-bottomed boat to return so we could make our way into the grotto (we knew this was going to happen).  Once loaded into the boat, the tour guide made his way to the front of the boat, stood on the very edge, and used a rope system that ran throughout the grotto to silently pull us into the larvae’s domain.  Our eyes, already adjusted to pitch black, were stunned by the spectacle of thousands of bioluminescent beings attached to the ceiling.  Moving through the calm and quiet grotto staring at the glowworms above was like staring at beautifully clear starry constellations miles and miles away from any manmade light.  We must have spent at least fifteen minutes in there, but I could have spent hours more.