Before I delve into this review, I would first like to tell you a quick story. A few years back Krista, the dogs, and I were camping with our friends in Wyoming's Bighorn Mountains. It was evening, and we were all huddled around the campfire roasting marshmallows, drinking scotch, and enjoying ourselves when our friend's dog Denver alerted to a noise in the distance. We all stood up as Denver began to growl. The other dogs followed suit, each walking to the edge of the camp chairs, staring into the inky black night. We were all alarmed, and each of us began shuffling to turn on headlamps and stare into the distance. 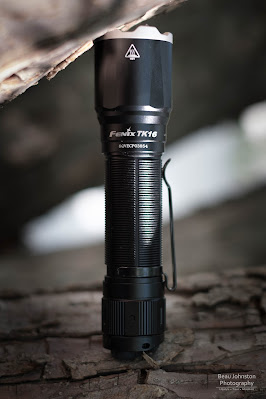 One of us yelled out into the night, "Who's there?", but none of us could see anything as we scanned back and forth with our headlamps. Eventually, a figure appeared in the distance; a woman, who called out asking for help. As he approached, we could hear her explain that her truck had broken down up the road and she needed help getting it started. Despite all of our headlamps being trained on the woman as she approached, it was difficult to make out her figure until she was too close for comfort.
Although the event ended peacefully, with two of us running up to jump-start her truck, it was unsettling and eye-opening. We were thankful the dogs alerted us to the approaching person but worried about how close the person was able to get to camp without the group detecting them, and even more frustrated with how close they were able to get to camp before our headlamps and flashlights were able to fully illuminate them.
Since that day, I'd been searching for a high-output flashlight to take camping with us. I wanted something that was relatively compact and began looking online for yet another flashlight to add to the kit. I tried a few 500 and 600-lumen flashlights, which seemed fine for around the house, but lacked the 'punch' required to spot someone at distance in the open. It wasn't until the Fenix-Store.com reached out and introduced me to their new TK16 V2.0 that I finally found what I was looking for - a compact high-output flashlight.

I have had the privilege of using the Fenix TX16 V2.0 for the last two months now and cannot be more impressed. Not only does it produce a face-melting 3100 Lumens at full power, but the flashlight also offers a total of five light-intensity modes, for those times when you don't need the person approaching to think it is the second coming of Christ.
To demonstrate the TK16 V2.0 illumination range, I stepped out into the ally behind our house. I feel the ally does a good job of both showing the illumination at varying ranges as well as the spread the flashlight produces. For the test, I taped the flashlight to the underside of the tripod and set out to photograph the different levels. Note, the power pole is 105ft from the camera, and the opposite side of the street is about 165ft away. You will want to be careful because you can easily blind yourself if you shine the flashlight on the highest setting on a nearby object that is highly reflective - just trust me on this one! 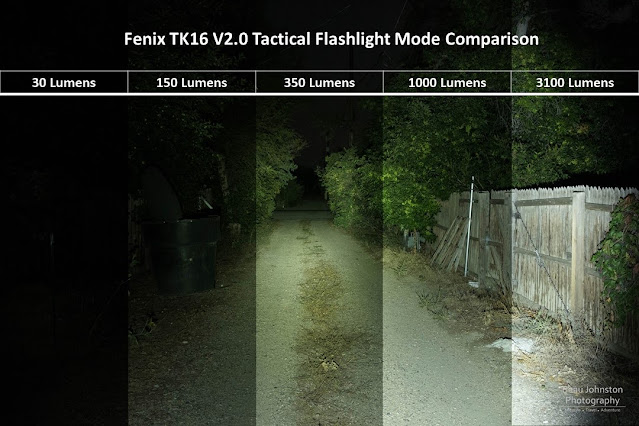 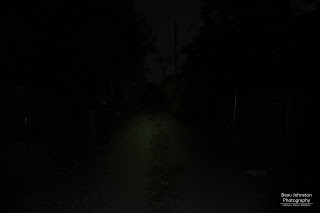 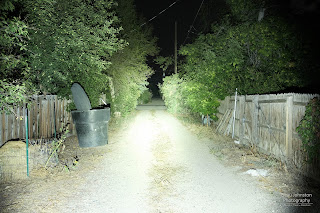 Eco (30-Lumens) vs. Turbo (3100-Lumens)
In addition to the outstanding illumination performance, the TK16 V2.0 packs a lot of other great features. I like the multi-function exposed tail switch, which allows for easy transition between strobe, momentary on, and traditional on/off functionality. The internal ARB-L21-5000U Li-ion battery is easily charged using a USB Type-C charging cable (supplied) once the tail cap is removed.
One thing you will notice if you run the TK16 V2.0 for any length of time on the "High" or "Turbo" modes is how quickly the front of the flashlight gets hot - I mean really hot! A few weekends ago we were camping along the shores of an area reservoir when we heard splashing in the water. I grabbed the TK 16 V2.0 from my pocket, turned it on, adjusted it to the highest setting, and began to search the water for what was causing the ruckus. Much to my surprise, the flashlight became almost unbearable to hold, except for the rearmost half of the body, in just a few minutes. That little Luminus SST70 LED puts off a heck of a lot of heat to produce those 3100 lumens!

I would highly recommend this flashlight to anyone looking for a high-output flashlight for camping or everyday carry. Despite the heat that comes off this little flashlight, I have been incredibly impressed with its form and function. The flashlight now follows me anywhere I go, as part of my off-body EDC kit that resides in my travel backpack. I am incredibly fond of this little flashlight, as I am with my first Fenix flashlight, the L1D, which I had been packing around for some twelve years now.
Looking for something closer to a tactical weapon light? I will likely be purchasing the TK16 V2.0 Tactical Bundle as a weapon light for my Benelli Supernova. This would allow the light to be attached to a longarm, where you wouldn't be affected by the heat output, and operated via a remote switch.


Disclosure of Material Connection: I was given the equipment used in this review in consideration for review publication.